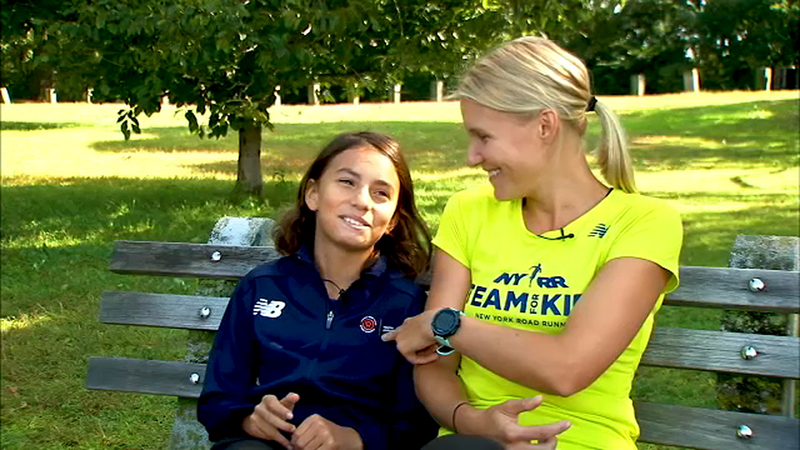 NEW YORK CITY (WABC) -- For one woman running her second New York City Marathon, the sport is about more than athleticism -- it's become a way to bond with her son.

Lisa Fernandez-Cruz is a pastry chef, a mom, and a runner who for years had used it as a means of staying healthy and also clearing her head.

Several years ago, she took her now 11-year-old son Wil along with her for a run and discovered he too experienced huge benefits from running.

Wil has a mild form of autism, and Lisa said running improved his behavior, his performance in school and his confidence.

"It was giving him so much mental help and social help," she said.

"When I'm running, I mostly think about a lot of stuff," Wil said. "But the thinking part is what helps me get to the point where I need to be. I don't know how, but it helps."
Lisa and Wil also agreed running has also improved their relationship.

Wil said he partly likes running because it gives him alone time with his mom, and Lisa said when they run, Wil talks to her more openly.

"When he runs, he talks to me about anything that comes into his mind," she said.

Lisa is running with Team for Kids in the 2018 Marathon to raise money to support the youth programs offered by the New York Road Runners that helped her son.

"As soon as you start following New York Road Runners on Instagram, it's like, 'Run for Team for Kids,' and I was like, 'What is this Team for Kids?' And then realized, 'Oh wait, they're the charity. That's the reason why my son is having such an amazing time running,'" she said. "So that's why I stuck with Team for Kids. Seeing what it did for him in just three years, I can only imagine what it's doing for other children across this city."

Wil also plans to run on Marathon day in the youth invitational, and one day, he hopes to run the full marathon along with his mom.

"26.2 miles, it's a long run," Wil said. "Running lets you be yourself and be confident in yourself."