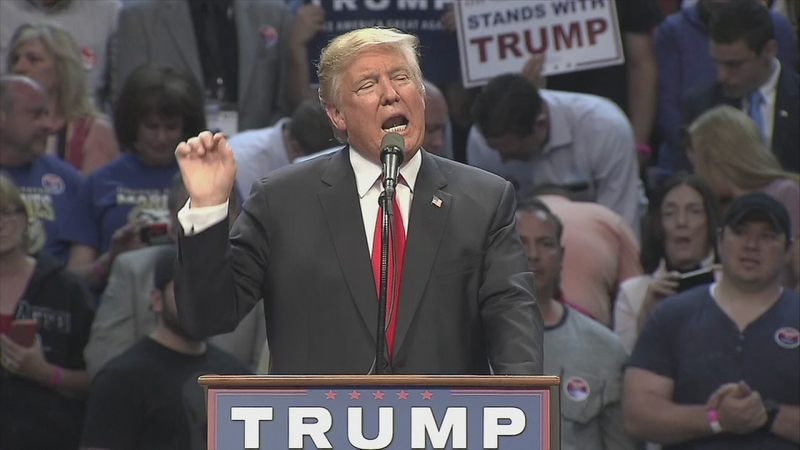 WASHINGTON -- Donald Trump, the outsider, is making his case to California's Republican establishment after he kicked off his crucial campaign for the state's presidential primary with an enormous rally marred by confrontations between protesters and his supporters on the streets.

The front-runner and his two rivals pitch their campaigns from the stage and in behind-the-scenes cajoling at the GOP convention outside San Francisco, with Trump and Ohio Gov. John Kasich appearing Friday and Texas Sen. Ted Cruz and his new running mate, Carly Fiorina, up Saturday.

It's a key event in the campaign for the nation's largest GOP primary, June 7, an exercise that usually comes after the party nominees are known but this time looms as a decisive contest that could either clinch the prize for Trump or force him into a contested convention in July.

All three candidates are looking to galvanize supporters, sway undecided party members or poach from rival campaigns at the convention. "It's going to be a free-for-all," predicted the state party vice chairman, Harmeet Dhillon.

That label clearly applied to Trump's Orange County rally Thursday night, which filled the Pacific Amphitheatre to its capacity of about 18,000, with many hundreds more turned away.

Protests that stayed mostly peaceful during the event grew in size and anger after. Police in riot gear and on horseback pushed the crowd back and away from the arena; one Trump supporter had his face bloodied in a scuffle as he tried to drive away. One man jumped on a police car, leaving its front and rear windows smashed and the top dented and other protesters sprayed graffiti on a police car and the venue's marquee.

About 20 people were arrested, said the Orange County Sheriff's Department.

Meanwhile, Indiana Gov. Mike Pence gave Cruz a big boost in his push to stop Trump's march to the nomination.

Pence made his support for the Texas senator official during an afternoon radio interview, casting Cruz as "a principled conservative."

"The man has shown the courage of his convictions," Pence said, citing Cruz's fight against government spending and the federal health care law, and his "strong and unwavering stand for the sanctity of life."

Pence, who faces his own re-election test this fall, also praised Trump, who he said "has given voice to the frustration of millions of working Americans."

"I'm grateful for his voice in the national debate," he said. "I'm not against anybody, but I will be voting for Ted Cruz in the upcoming Republican primary."

The Indiana governor's backing gives Cruz a desperately needed boost in his fight to block Trump from claiming the delegate majority before the GOP's national convention in July. A Trump win in Indiana on Tuesday would all but ensure he becomes the presumptive nominee.

Trump swept all five Northeastern primary elections earlier in the week and enjoys a massive delegate advantage over his Republican rivals. Cruz has been mathematically eliminated from earning the 1,237 delegate majority, but insists he can block Trump from the majority as well, as the 2016 contest shifts to "friendlier terrain" in the West and Midwest. The Texas senator declared he is "all in" on Indiana.