Teen's body found after disappearing while swimming at Rockaway Beach 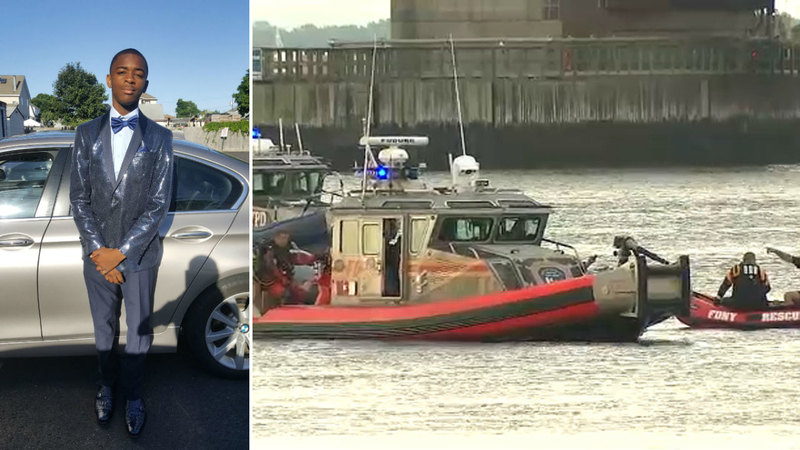 Teen's body found after disappearing while swimming at Rockaway Beach

ROCKAWAY BEACH, Queens (WABC) -- The body of a 15-year-old boy who went missing off the coast of Rockaway Beach has been found.

The teen was swimming with friends on Sunday when police say he jumped in the water with a group of people but wasn't able to stay above water.

First responders searched the area Sunday night but 15-year-old Maintain Odozi was never found. Eyewitnesses said rescuers did all they could, but the water was too deep to find the young teen.

Family members waited by the shore all day as divers searched the water and his mother was there when he was pulled from the water.

"He recently just learned to swim with his best friend maybe about a year or two ago," his mother Tashima Wright said.

"It was a bad current -- something I had never seen at the bay," Pender said.

Odozi had already slipped under once when Pender grabbed him.

"He started to fight again and got pulled back under, he had pulled me with him," Pender said. "I had my arms around him so I had to release and just grab his hand so I could get some air. It just slipped."

Odozi just turned 15 in June and was going into his sophomore year of high school.

His death marks the fourth time a swimmer has died off of Rockaway Peninsula in the last month.

On July 31, the search for a missing 18-year-old swimmer ended in tragedy. The teen, identified as John Munoz, of Brooklyn, was the third person to drown in the Rockaways in July.

Earlier in July, a couple from Inwood drowned off Beach 9th Street.

The deaths occurred after lifeguards were off duty. Swimming is prohibited after the lifeguards leave at 6 p.m. each day.
----------
* More Queens news
* Send us a news tip
* Download the abc7NY app for breaking news alerts
*Follow us on YouTube
*
Report a correction or typo
Related topics:
rockaway beachqueensnew york citybeachesdrowningnypdfdny
Copyright © 2021 WABC-TV. All Rights Reserved.
More Videos
From CNN Newsource affiliates
TOP STORIES