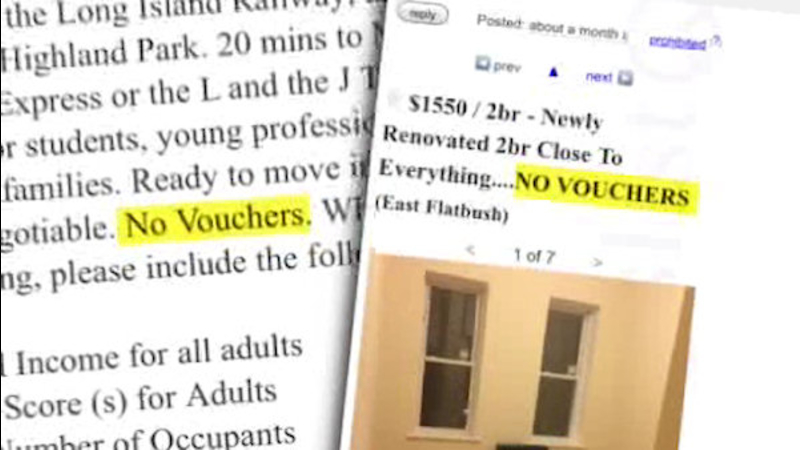 NEW YORK (WABC) -- The New York City housing voucher program is designed to get homeless people off the streets, but an Eyewitness News investigation has uncovered that it not easing the problem.

It allows homeless people to use vouchers to rent an apartment, much like food stamps. But imagine if supermarkets didn't take food stamps? That is what is happening now, as some landlords have refused to accept housing vouchers.

The vouchers are a ticket out of the shelter if the homeless family can find a taker, but rising rents and a troubled history have made them a tough sell for many apartment owners. Some are willing to break housing discrimination laws rather than get involved in Mayor Bill de Blasio's key program for the homeless.

Lisa Millhouse and her daughter have been living in a Bronx shelter since last August, and she's been trying to find a home with the city- and state-backed voucher that would pay more than $1,500 a month for a two-bedroom apartment.

"I literally called 60 real estate (agencies)," she said. "I went into real estates, filled out application, 'we'll call you,' never heard from them again."

The Investigators' Jim Hoffer recently joined Millhouse as she went from broker to broker in Brooklyn looking for an apartment. We gave her an undercover camera to capture the true frustration encountered by her and even by the brokers.

She kept hearing that at $1,500, the voucher is below the market value of a two-bedroom in an increasing number of neighborhoods.

Millhouse: "How come not more landlords accepting it? It's $1,500 a month."
Sammy Hassan/Achievers Realty: "Pick up the phone, and give a nice call to 311 and file a complaint. It's money well-deserved, and you should speak up."

We went back to talk with the broker about why some landlords are rejecting the vouchers.

"As soon as we mention there are tenants with the programs, they either hang up the phone or refuse to deal with us," Hassan said. "They don't want to deal with it...I guess because lack of knowledge."

Some landlords are so distrusting of the homeless rental vouchers that they blatantly say so in their apartment ads.

Hoffer: "When a landlord puts on Craigslist, 'no voucher accepted,' is that illegal?"
Steven Banks/Commissioner NYC Human Resources: "Yes, it is, and there are 86 investigations that are ongoing by the city Human Rights Commission to address this."

Banks insists the voucher program for the homeless is working, having placed nearly 5,000 families in apartments in one year. But another 5,000, like Millhouse and her daughter, are still looking.

Eyewitness News has learned that a big problem is that landlords had the rug pulled out from under them four years ago, when then-Mayor Michael Bloomberg canceled the voucher program, leaving landlords with non-paying tenants. The city is promising it won't happen again.

"The success that we are having, with the 5,500 families and individuals who have been able to use these vouchers, shows the landlord community that the city can be relied upon to pay these funds," Banks said. "That the state and city aren't going to cut off these programs."

But it's clear in Millhouse's struggles to find an apartment that the city still has a long way to go to convince some landlords they won't get burned again by rental vouchers.

"There are people that have been in this shelter for more than a year," Millhouse said. "I honestly don't know (what I'm going to do). I'm very frustrated at this point."

On Tuesday, the head of the city's Department Homeless Services resigned, and Mayor Bill de Blasio called for a complete review of all homeless programs, including the rental vouchers.

The number of homeless hovers near a record 60,000.