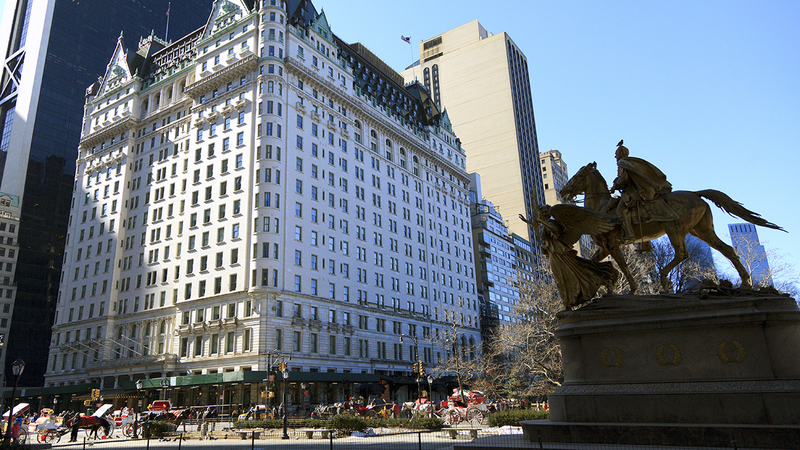 MIDTOWN, Manhattan (WABC) -- Real estate folks trying to sell a property often label it as "iconic" when it really isn't, but the word surely applies to the Plaza Hotel.

It has represented class and elegance for more than 110 years, which is just one reason it's been seen in so many movies.

"The Great Gatsby" gathered his friends where so many have come to visit through the years, as the Plaza has earned a place in the history of show business.

"I think about all of the people who have been here before us," author Patty Farmer said as she strode down towards the Oak Bar on the 59th Street side of the hotel.

She first visited the hotel as a child with her mom.

"Had tea, and it was magical," she said.

It inspired her to put together a picture book called "Starring the Plaza," showing the link between the hotel and Hollywood.

"It becomes part of the movie rather than just set in a hotel that could be interchangeable with any other hotel," she said.

"Excuse me, where's the lobby?" he asks Donald Trump, who replies, "Down the hall and to the left."

When the man who is now president of the United States owned the Plaza, filmmakers asked him for permission to roll up the carpet in the lobby.

"Mr. Trump said yes, and they rolled up the carpet for a scene where Macauley Culkin would go sliding across this expansive foyer floor," Farmer said.

It's arguably the most famous scene ever shot here, though older folks may prefer "The Way We Were."

Cary Grant sure looked like he belonged at the Plaza in "North by Northwest," and he is just one of an astounding number of stars who have passed through these portals.

"On quiet nights, you can almost feel their presence," Farmer said.

Just as you can imagine the little girl named Eloise running up and down the halls or imagine what it must have been like for The Beatles when bedlam greeted them on the streets outside.

Parties, premieres, and the paparazzi -- it's all part of the unique history of the Plaza.