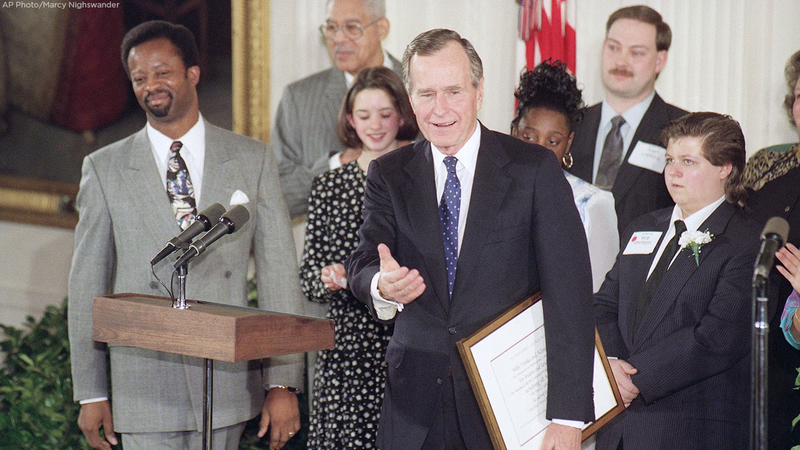 'Thousand points of light' and Bush 41's legacy of service

One of the enduring parts of former President George H.W. Bush's legacy is his commitment to service and his "thousand points of light" belief that America's volunteer organizations are "are spread like stars throughout the nation, doing good."

Bush's well-known "thousand points of light" mantra originated on the campaign trail in 1988 as he hailed the virtues of community and volunteerism. Though the phrase was panned by some in the media, Bush stuck with it, later invoking it in his inaugural and State of the Union addresses.

"I have spoken of a thousand points of light, of all the community organizations that are spread like stars throughout the nation, doing good," Bush said during his inauguration in 1989. "I will go to the people and the programs that are the brighter points of light, and I'll ask every member of my government to become involved. The old ideas are new again because they're not old, they are timeless: duty, sacrifice, commitment, and a patriotism that finds its expression in taking part and pitching in."

While in office, Bush presented the Daily Point of Light Award to everyday Americans who volunteered their time to make a difference in their communities, and he honored more than 1,000 Americans throughout his four-year term. He established the Office of National Service and signed the National and Community Service Act of 1990 supporting service-learning initiatives.

"The solution to each problem that confronts us begins with an individual who steps forward and says, 'I can help,'" Natalye Paquin, the foundation's chief executive officer, told the Associated Press earlier this year.

In his later years, Bush worked alongside Presidents Bill Clinton, George W. Bush and Barack Obama to spur Americans into action by supporting similar service initiatives and events like The Presidents' Summit for America's Future and United We Serve. Bush returned to the White House in 2013 to present the 5,000th Daily Point of Light award alongside President Obama.