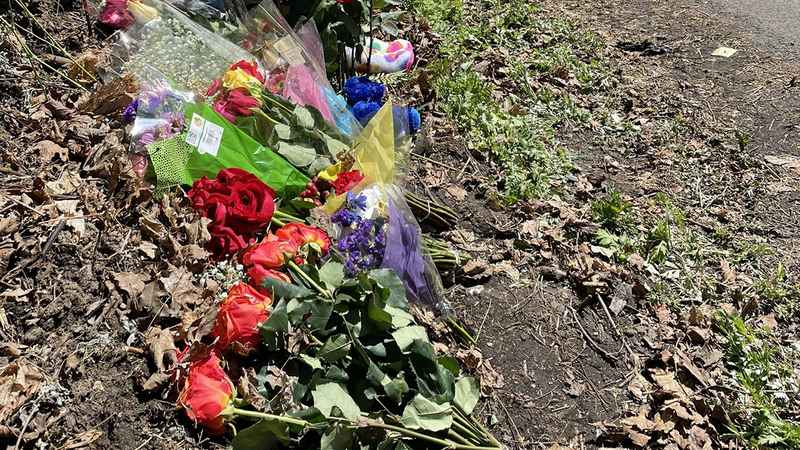 SUFFERN, Rockland County (WABC) -- A Suffern High School student was killed and four other teens injured in a rollover crash early Saturday, and authorities say the driver -- also under the age of 18 -- was intoxicated.

The crash happened just before 3 a.m. on Route 202 in Montebello, and responding officers arrived to find the vehicle on its side.

Jacqueline Zangrilli, 16, was pronounced dead at the scene. A roadside memorial of flowers and stuffed animals now sits at the scene, highlighting the grief and sorrow that grips much of Rockland County.

"I am deeply saddened to be notifying you that we were informed early this morning of a tragic car accident on Rt. 202 involving five students from Suffern High School, which involved one fatality," Principal Patrick Breen wrote in a letter to families. "While we are unable to confirm any details at this time, we have activated our crisis team and will be offering counseling and support services to all of our students and staff at the high school."

The four other occupants were transported to both Nyack Hospital and Westchester Medical Center with non-life threatening injuries.

"It's just devastating to have this happen to someone who is so young," Ramapo Town Supervisor Michael Specht said. "And the other students who were injured. The motto is 'Suffern strong,' and everyone is trying to stay strong. But it's not an easy time."

Police say the investigation determined the 17-year-old male driver, from Suffern, was drunk.

A wake will be held for Zangrilli on April 28 at 4 p.m. at Wanamaker & Carlough Funeral Home, 177 Route 59, Suffern. A Funeral Mass will be held on April 29 at 10 a.m. at Sacred Heart Church, 129 Lafayette Ave, Suffern, with private cremation services to follow.

"A student death is a difficult and challenging situation that can generate a high level of anxiety and distress in some students and also may point out the reality of a child's own mortality," Breen wrote. "In addition, children may have had no experience in coping with a loss like this and may be confused as to how to handle grief. If you feel that your child(ren) is having difficulty, we encourage you to discuss their thoughts and feelings to help them work through their grief or concerns. This is an incredibly difficult time for our community, and on behalf of Suffern High School, I ask that you keep all those involved in your thoughts and prayers during this difficult time."

"I just said to my daughter and said, 'Whatever you do, don't ever get in a car with anyone, you know, just call me, call daddy, call somebody at work,'" she said. "'Be the party pooper. Be the safe driver.'"

The vehicle also struck a utility pole, causing power disruption in the area.

The crash followed a big Friday night win for the school football team.

Investigators will now examine where the teenagers were before the crash, where they got the alcohol, and who provided it to them.

But even for veteran officers, a tragedy like this is personal.

"This continues to be a difficult time for our community. Clinicians are available to help our students and staff process their feelings and understand what has happened. We greatly appreciate the additional clinical support made available by Rockland BOCES other Rockland County school districts and county agencies. Parents and students are encouraged to reach out to their school counselor, teacher and/or building principal if they would benefit from speaking with someone. The resilience we share in our community was evident this weekend through the support shown at Suffern High School. We will get through this the same way we have gotten through other challenges and tragedies; supporting each other, together, as one. I am grateful to be part of a community that pulls together in times of crisis. Our broader community is there for us, too. Many of our county high schools participated in a 'Blue and White Day' on Monday to show their support for Suffern Central. We are humbled and strengthened by the support of our neighbors and fellow residents."

The investigation into the cause of the crash is ongoing and is expected to take some time to complete.