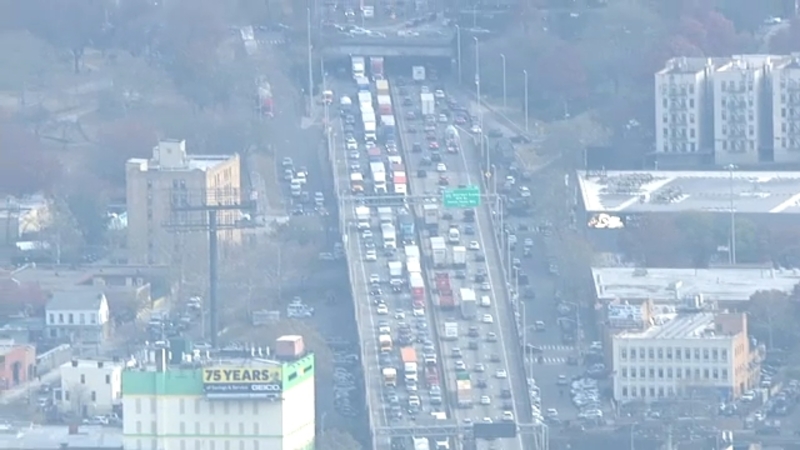 BRONX (WABC) -- A New York Congressman and environmental groups held a press conference Friday to push the Biden Administration to include transforming the Cross Bronx Expressway in the president's sweeping infrastructure plan.

Rep. Ritchie Torres was joined by state Assembly member Karines Reyes and various Bronx environmental organizations and advocates to ask that the dilapidated highway be part of the American Jobs Plan.

It may be the most notorious highway to drive on, with 175,000 cars and trucks traveling daily, but it's even worse to live near.

The Cross Bronx Expressway was designed by Robert Moses and is detested by Bronx residents, not only for the way it divided neighborhoods, but also for the air and noise pollution spewed by the 300 diesel trucks travel on it every hour of every day.

Torres called it a plague on the Bronx, illustrating how the crumbling roadway is emblematic of environmental racism and how it has worsened health outcomes in the Bronx, which have some of the highest asthma rates in the country. Their plan would turn miles of the Cross Bronx into green space.

"The Cross Bronx Expressway has imposed on the Bronx the burden of chronic disease," Torres said. "We can't breathe here in the Bronx."

President Biden's infrastructure package will include $20 billion in investments to reconnect neighborhoods torn apart by "urban renewal" and should include the Cross Bronx Expressway, they said.

They also highlighted the public health issues exacerbated by the Cross Bronx Expressway that have contributed to the Bronx being the state's unhealthiest borough, and showed examples of how other cities transformed their highways to better serve residents.

The Cross Bronx Expressway cuts right through the heart of the Bronx, causing harmful economic and environmental consequences for low income families in the surrounding neighborhoods.

Torres urged the administration to take action in delivering for the people of the South Bronx by rebuilding the highway and pointed to innovative ideas that would begin transforming the current Cross Bronx Expressway to make it a cleaner and safer environment for the surrounding communities.

He is backing a proposal to transform sunken portions of the roadway into parkland, green space that would be built on caps placed over the 2.5 miles of the highway that are below grade.

"It's basically a win-win situation, because you get to keep the expressway and you get to have green space and get rid of the noise and pollution," Columbia University Assistant Professor Peter Muennig said. "So think it's very, very doable."

The American Jobs Plan is currently being considered by Congress and would require $2 trillion in spending over eight years, funded by higher corporate taxes.