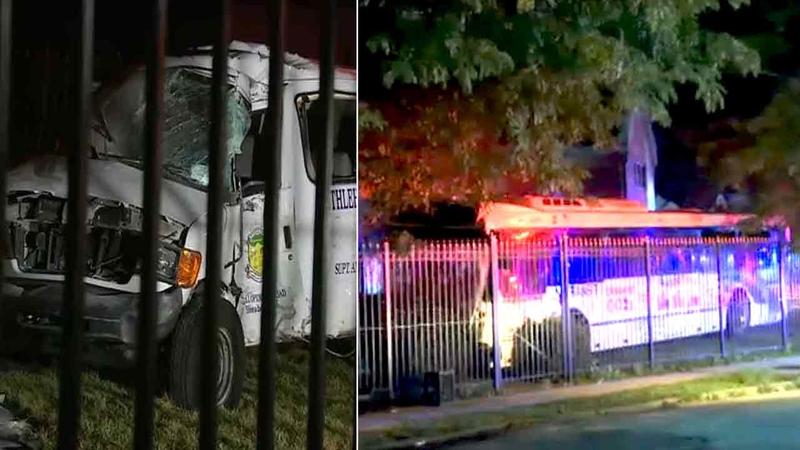 NEWARK, New Jersey (WABC) -- More than a dozen people are hospitalized, including two suspects who are in custody, after a church van being pursued by police collided with an New Jersey Transit bus in Newark early Friday.

The crash happened at 1:45 a.m. at the intersection of South 16th Street and Springfield Avenue.

The stolen church van was eventually spotted by Maplewood police officers, who began to pursue it.

Police investigating after a stolen church van crashed into a @NJTRANSIT bus this morning at 16th and Springfield. Several people on the bus were Injured but will be okay. Police were attempting to pull over the driver of the van just before the collision. @ABC7NY pic.twitter.com/nVoXrH2Y7O

The driver of the van led police on a chase into Newark, where it collided with the bus.

The force of the collision sent both vehicles onto the property of the United House of Prayer For All People church.
EMBED More News Videos

Candace McCowan has more on the overnight crash in Newark.

Nine people on the bus, two police officers and two suspects identified as Dandel Grimsley and Lionel Watson were all taken to University Hospital to be treated for injuries.

The injuries to the bus passengers and the police officers were described as minor. The driver of the van sustained serious injuries.

The van was to be used for a church field trip Friday, but the event was canceled after the theft.

The intersection of 16th and Springfield was shut down for several hours as police investigated and crews worked to clear the wrecked vehicles.