Rallies, vigils in support of Ukraine held across Tri-State; US fears cyberattacks 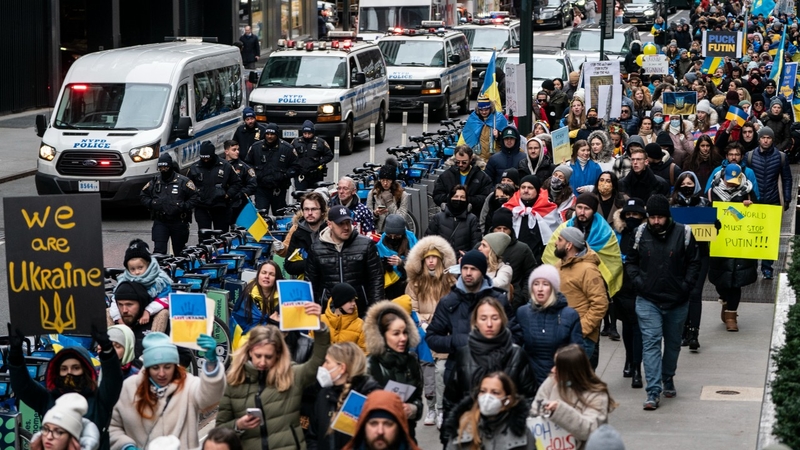 Rallies, vigils in support of Ukraine held across Tri-State

NEW YORK CITY (WABC) -- Rallies are being held across the Tri-State area and the nation in support of Ukraine after Russia invaded the sovereign nation, this as the U.S. remains on high alert for possible cyberattacks as sanctions increase in response to the attack.

New York City is home to more than 150,000 Ukrainians, the largest such community in the country, with pockets in Manhattan's East Village and Brighton Beach in Brooklyn, and scattered populations throughout the five boroughs.

"New York City is home to the largest Ukrainian population in America, and our city stands with them and joins them in praying for those who find themselves under attack this morning," Mayor Eric Adams said on Twitter. "The unprovoked and unjustified invasion of their homeland is an assault on freedom."

There was outrage mixed with fear as Ukrainian-Americans took to the streets by the hundreds Thursday, rallying in Times Square before marching through Midtown to the Russian Mission to the United Nations on Manhattan's Upper East Side.
EMBED More News Videos

There was outrage mixed with fear as Ukrainian-Americans took to the streets by the hundreds Thursday, rallying in Times Square before marching through Midtown to the Russian Mission to the United Nations on Manhattan's Upper East Side.

"It's awful, obviously," Ukrainian New Yorker Ian Kyrychenko said. "We have all the families there, our relatives, and right now, they're trying to find some safe place."

Authorities shut down 67th Street outside the Russian Mission, and protesters were kept half a block away.

N.J. Burkett has more on the rallies are being held across the Tri-State area Thursday in support of Ukraine.

"My family has been bombarded at the moment as we speak," Vera Tolkach said. "So every time I check my phone, I don't know they will still be there."

Jason Birchard is the third generation Ukrainian owner of Veselka, a restaurant on Second Avenue.

"I'm a big, big believer of optimism," he said. "I was a big believer in diplomacy. I was thinking that this was all a gesture, a posture of Putin to pressure Ukraine to sign some NATO non-NATO agreement. I'm extremely upset, I'm flabbergasted, I'm upset, I'm angry, I'm sad, I have a very heavy heart. I mean, this is, I believe, not only an attack on Ukraine. This is an attack on the world."

There is also a large Ukrainian population in Bound Brook, and the Ukrainian Orthodox Church of the USA has roots in New Jersey.

Residents can only watch helplessly as they fear for loved ones and their home country.

At a prayer vigil there Thursday, the mood was somber -- but their prayers were calling for strength in the wake of war.

Anthony Johnson has more on the rallies being held across the Tri-State Thursday in support of Ukraine.

Members of the Ukrainian Metropolitan Council had more to pray as jarring images of devastation and destruction come in from the nation they love.

They have seen years of abuse in the past and are vowing to stand against Russian aggression.

The group of Christians says war is evil, but they are asking the West to step up its supplies of military aid to protect the Ukrainian people in their time of need.

"Russians are attacking without any consideration for the places where people reside," Archbishop Daniel Zelinsky said. "If only they were attacking strategic locations, that would be one story. But now they are impacting places of residence where people live."

They say America must lead the way to stop Vladimir Putin because he is pushing the European continent closer to World War III.

"I cannot reconcile in my mind that in the 21st Century in the middle of Europe, you will have somebody behaving like this," Zelinsky said.

Derick Waller reports on the crisis from the United Nations, and ABC's Aaron Katersky is on the ground in Ukraine.

Meantime, New York Governor Kathy Hochul said the state is "on heightened alert" against cyberattacks related to the Russian military advance in Ukraine.

"We are on heightened alert with respect to cyber security and our own defenses," she said. "Our thoughts are with the individuals that are under siege today."