Congressman among those shot at baseball practice; Suspect killed 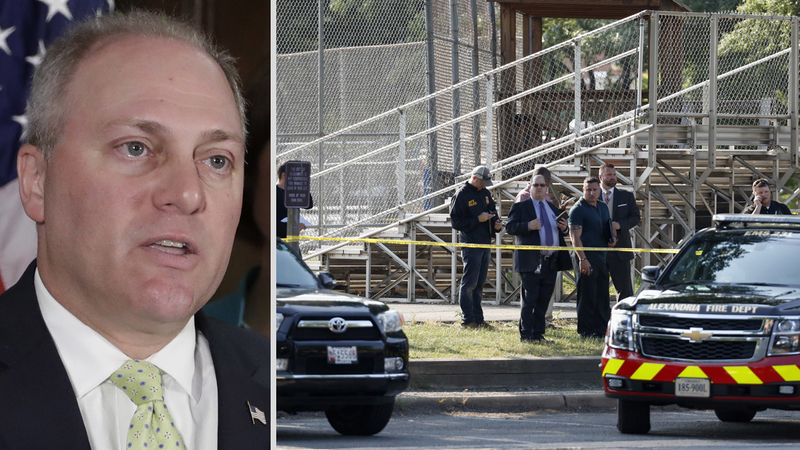 Scalise, 51, the No. 3 House Republican leader first elected to the House in 2008, was listed in critical condition following surgery, the hospital said.

His office said that before surgery for a wound in his hip he was in good spirits and spoke with his wife by telephone.

President Trump visited Scalise in the hospital and described him as being in "very tough shape." The president was accompanied by the First Lady who spoke with Scalise's wife, Jennifer, for about 10 minutes. The First Lady also gave her a bouquet of white flowers.

Republican members of Congress were practicing for an upcoming charity game when the gunman started shooting around 7:00 a.m.

Capitol Police said officers who were part of Scalise's security detail returned fire and wounded the shooter, who was taken into custody.

The FBI says the shooter has been identified by law enforcement as 66-year-old James T. Hodgkinson of Belleville, IL.

President Trump confirmed that the suspect died at the hospital.

According to one eyewitness, he asked before opening fire if the players were Democrats or Republicans.

The FBI says an emergency trace is being done on a rifle and handgun recovered in connection with the shooting.

Hodgkinson had been living out of his van in the Alexandria area in recent months, the FBI said.
Rep. Mike Bishop, R-Mich., said Scalise was standing on second base when he was shot. "I was looking right at him," Bishop told Detroit radio station WWJ. "He was a sitting duck."

Rep. Mo Brooks, an Alabama Republican, said that Scalise "crawled into the outfield, leaving a trail of blood."

"We started giving him the liquids, I put pressure on his wound in his hip," Brooks said.

Along with Scalise, two Capitol Police officers were also injured but were expected to recover.

Texas Rep. Roger Williams, who is one of the coaches, said the Republican baseball team holds its practice daily at 6:30 a.m. at Eugene Simpson Stadium Park in Alexandria.

In a statement, Williams said that at about 7 a.m. Wednesday, a gunman arrived at the practice and opened fire.

Williams said that one of his aides, Zack Barth, was shot, but "is doing well and is expected to make a full recovery." Barth has been released from the hospital.

Also wounded was former congressional aide Matt Mika, who now works for Tysons Food in its Washington office. Mika's family said the lobbyist was shot multiple times and was in critical condition and in surgery.

Mika was once an aide to former Rep. Vito Fossella, from Staten Island.

At least 21 members of Congress were in attendance at this morning's baseball practice, including two U.S. Senators, at least one lobbyist and several staffers and family members.

Rep. Joe Barton says his two sons were in attendance, including 11-year-old Jack and older son Brad. No New York area congressmen were there, officials said.

Flake said the gunman had "a rifle of some sort" and "a lot of ammo." Scalise was shot by a man standing off the third-base side of the field, said Flake.

"We were doing batting practice," said Flake. "All of a sudden we heard a very loud shot ..."

At least 4 were shot in Alexandria, Va.

Democrats had practiced separately earlier in the morning. Capitol Police were already on the scene when the shooting started, and Alexandria police were on the scene within three minutes.

United States Capitol Police said they had a "robust police presence" around the Capitol Wednesday morning, but that the building remained open after the shooting.

Earlier in the day, President Donald Trump said in a written statement that he and the vice president are "deeply saddened" by news.

"The Vice President and I are aware of the shooting incident in Virginia and are monitoring developments closely. We are deeply saddened by this tragedy. Our thoughts and prayers are with the members of Congress, their staffs, Capitol Police, first responders, and all others affected."

Vice President Mike Pence was heading to the White House Wednesday morning after canceling an event.

Kemberly Richardson reports on the added security measures in New York City in response to the Virginia shooting.

Katie Filous was walking her two dogs near the field when she heard "a lot of shots, probably more than 20." She said the shooting "went on for quite a while."

Filous said she saw the shooter hit a uniformed law enforcement officer, who she said was later evacuated by helicopter. She said the officer had gotten out of a parked car, drawn a handgun and shouted something to the gunman, who then fired.

House Speaker Paul Ryan has announced the charity baseball game will be played on Thursday as planned at Nats Park. But House GOP aides tells ABC News the GOP baseball team's practice/breakfast originally scheduled for Thursday morning at Nats Park ahead of the evening game has been cancelled.

Ryan and Democratic Leader Nancy Pelosi of California both spoke on the House floor issuing calls for unity. "An attack on one of us is an attack on all of us," Ryan said.

Sen. Bernie Sanders, the former candidate for the Democratic presidential nomination, said on the Senate floor that the shooter apparently was a volunteer for his campaign last year. Sanders said he denounced the violence "in the strongest possible terms."