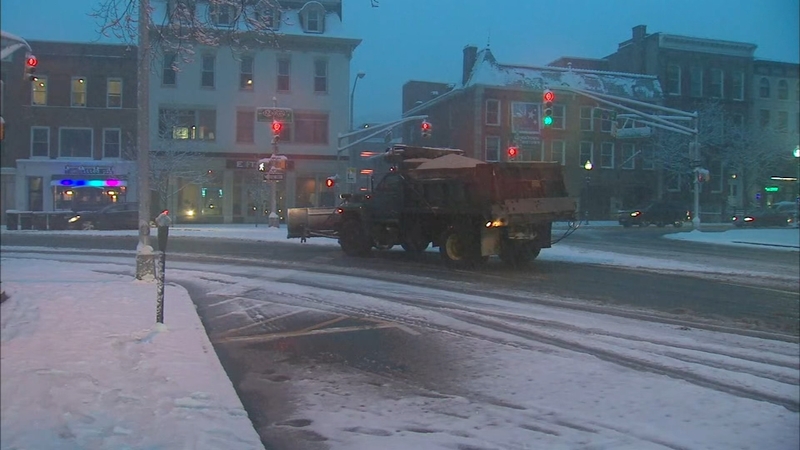 It was yet another winter blast for the storm-weary northeast still reeling from four nor'easters in three weeks and not quite what residents expected after a somewhat spring-like weekend.

Parts of the region saw upwards of 8 inches of accumulation, and a winter weather advisory of was in effect for much of the area. Some school districts closed for the day, while others opted for a delayed opening.
EMBED More News Videos

The wintry mix made for dangerous driving conditions, and residents were urged to take mass transit where available. Salt trucks treated some roadways before the storm began, with plows taking over afterwards. Still, the amount of accumulation came as a surprise to many.

LaGuardia, Kennedy and Newark Liberty airports all reported some flight disruptions, and travelers were advised to check with individual carriers.

Elsewhere, the Yankees were forced to cancel their home opener as snow built up in the stadium. The game has been rescheduled for Tuesday at 4 p.m. The Mets home game against the Philadelphia Phillies at Citi Field was also postponed. It has been rescheduled as part of a single-admission doubleheader on Monday, July 9, at 4:10 p.m.
EMBED More News Videos

Joe Torres reports on the storm's impact in the Bronx.

The storm was moving off the coast in the afternoon, giving way to gradually warming temperatures and melting.

Bus service to and from the Port Authority Bus Terminal experienced delays due to the conditions, and New Jersey Transit was cross-honoring.

The Staten Island Ferry was operating on a modified schedule, with service approximately every 20 minutes.

No major delays were reported on any rail or bus lines.