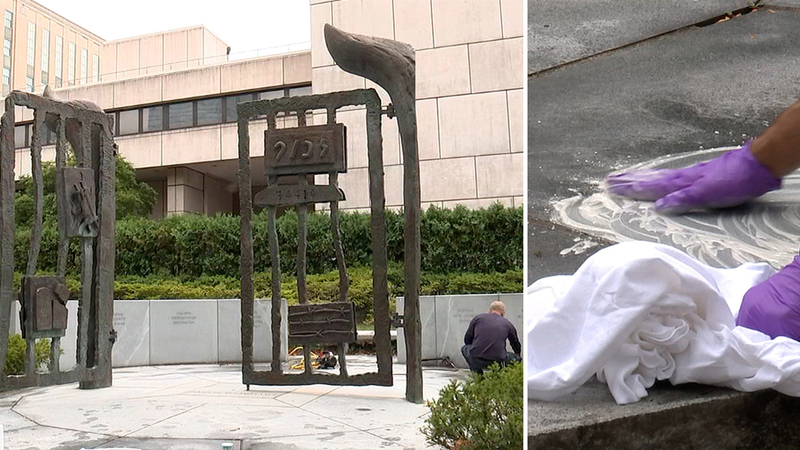 Authorities say hateful stickers and posters were discovered at the Garden of Remembrance in White Plains Tuesday, and police are stepping up patrols as a result.

"We are enraged by this act and heartbroken that individuals would target members of our community on the most solemn day in their tradition," county Executive George Latimer said in a statement. "County police are actively investigating and reviewing video of the area. We seek to find and punish those who did this act. We as a county, people of all faiths, stand with our Jewish brothers and sisters today and always."

Anti-Semitic writing was found on a sign outside the garden, while other graffiti was found inside the park as well.

The Garden of Remembrance was dedicated in 1992 at the Michaelian Office Building on Martine Avenue in downtown White Plains, created by the Holocaust and Human Rights Education Center.

"I am disgusted by the desecration of a Holocaust memorial in White Plains on the eve of Yom Kippur, the holiest day on the Jewish calendar," Governor Andrew Cuomo said in a statement. "More than 74 years ago the entire world reeled in shock, horror and sorrow over the senseless murder of more than six million Jews - mothers, fathers, children, grandparents, uncles, aunts, friends and neighbors. Vandalizing a memorial lovingly built in their honor is a revolting and cowardly act, and I have directed the State Police Hate Crimes Task Force to offer assistance to local authorities investigating this heinous act to ensure those responsible are held accountable. On this day of atonement, I join with New York's Jewish community in remembrance of the lives lost and I pray for love, peace and understanding. Hate has no place in this state."

Of the 1,749 victims of anti-religious hate crimes in 2017, 58.1% were victims of crimes motivated by the perpetrators' anti-Jewish bias, according to FBI statistics.