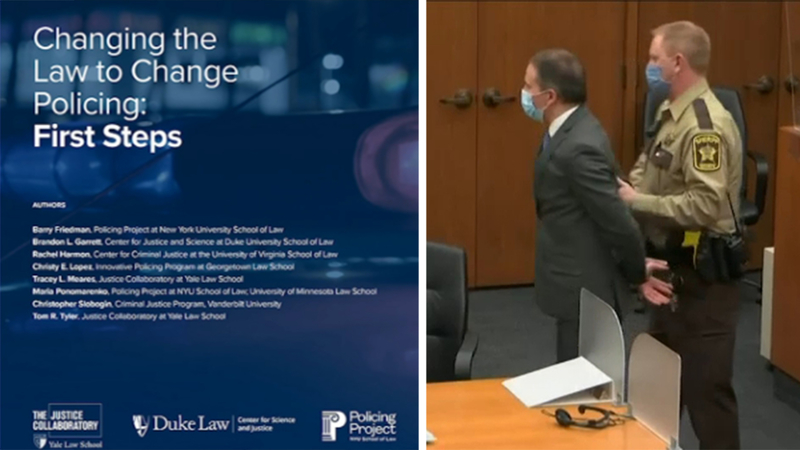 What's next for police reform after Chauvin guilty verdict?

NEW YORK (WABC) -- Tuesday's guilty verdict of Derek Chauvin in the George Floyd murder trial was a step in the right direction, but many believe there is still more work to be done on police reform throughout the country.
EMBED More News Videos

After three weeks of testimony, the trial of Derek Chauvin ended swiftly -- he was found guilty on all three counts in the death of George Floyd.

"Was there justice in the George Floyd case, there was accountability ultimately, but justice would have been if he was never killed in the first place," said Barry Friedman of the NYU Policing Project.
There was cheering and celebration as if it were a Super Bowl victory, but in the larger scope of social justice reform, the guilty Derek Chauvin verdict was only a field goal.

Since 2005, only seven police officers have been convicted of murder in officer involved shootings.

"If there's clear rules to point to, then you don't have to get to conduct as outrageous as Derick Chauvin before you say no, you violated the statue," Friedman said.

Friedman is a law professor at NYU and co-author of "Changing the Law to Change Policing."

While the focus now is on passing the George Floyd policing act, the study recommends taking it a step further with uniform laws on the federal, state and local levels.

Hundreds took the streets in New York City in reaction to the Derek Chauvin guilty verdict -- both to celebrate and call for further action.

"There's a lot of things that we call for and would do that are not in that act," Friedman said. "A comprehensive use of force rules, comprehensive reporting of police interactions including demographics."

Since the murder of George Floyd, New York has implemented department reform.

"Acknowledging the problem, as we did in the recent series of police reforms, acknowledging that there structural racism in policing that must be weeded out," Mayor Bill de Blasio said.

But Friedman says, to make generational change, the law must change too.