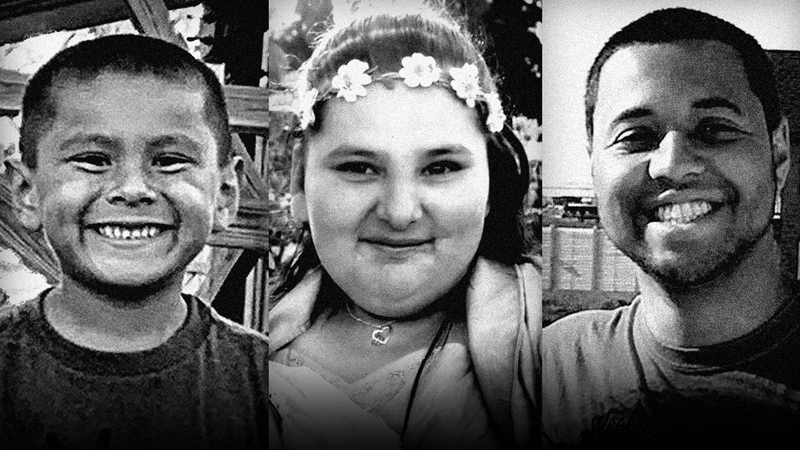 Everything we know about 3 victims killed at Gilroy Garlic Festival

GILROY, Calif. -- Three people died during a shooting at the Gilroy Garlic Festival shooting - an all-around good kid who was loved by everybody, a teen known as "Sunshine" who would have celebrated her birthday one week later and a 25-year-old described as the perfect son who called his grandmother every day to say "I love you" following the death of her husband. The victims of the annual California event have been identified as 6-year-old Stephen Romero, 13-year-old Keyla Salazar and 25-year-old Trevor Irby.

Police said the gunman was also killed on Sunday. They identified the suspect as 19-year-old man Santino William Legan.

Here's what we know so far about the victims who were killed.

The 6-year-old was at the annual food festival with his mother and grandmother, who were both hospitalized.

His other grandmother, Marivel Romero, says she was at home when they got a call from someone who said her grandson was shot.

The grandmother of a 6-year-old killed during the shooting at the Gilroy Garlic Festival is remembering her grandson as a "loving boy."

She remembers him as an all-around good kid who was loved by everybody.

One of his cousins fought back tears on Tuesday as he spoke about his loss.

"This isn't right, especially for such a little boy to pass away like this," Joshua Guicho said. "Does this really have to happen for the whole world to know that gun violence is very bad."

San Jose City Councilwoman Maya Esparza said in a Facebook post Monday that the 6-year-old victim was her cousin. On Facebook she wrote, "Heartache and prayers for my cousins who were wounded yesterday and losing my little cousin, only 6 years old. And I'm angry, so angry. This violence has to stop. How do some people have such little regard for life.

A GoFundMe page has been set up to for Stephen's family.

The bright young 13-year-old would've celebrated her 14th birthday one week from the shooting.

Strong, smart, beautiful, and vibrant were just a few words family and friends used to describe Keyla at a news conference in San Jose.

"We wanted to be here because we think it's important that the community knows who Keyla is," her aunt, Katiuska Pimentel told reporters through tears. "And how important she is for us."

The family of 13-year-old Keyla Salazar shared stories about who Keyla was, during a scheduled press conference on Tuesday.

Family members said Keyla was the first to stand up when she heard gunfire. They said she turned to look for family, that's when she was shot.

"Just a desperate wish that it never happened," said family friend, Rebeca Armendariz. "That it was all a bad dream."

Keyla was described by many as "Sunshine." She's a young woman who family said spent the morning of the shooting cleaning and completing chores to convince her parents to buy her a puppy.

"She was our motivation, and we're in pain that we lost her," Pimentel told reporters.

A GoFundMe has been set up for Keyla's family.

His brother died 25 years ago and his grandfather died one month ago. Now, Trevor Irby's family is preparing to lay him to rest.

ABC7 News reporter Luz Pena spoke with the 25-year-old's parents and grandmother, who were distraught by this news.

"The last thing I said to Trevor was, 'Trevor I love you,'" said Tammy Williams said. "He said, 'Mom I love you. I'm having a good time, I'll call you tomorrow.' Well, my call tomorrow never came. That call for me was getting in the plane to bring him home and bury him."

The parents of 25-year-old Trevor Irby recalled the heartwrenching moment they got a phone call telling them their son was killed in a shooting at the Gilroy Garlic Festival.

The call came from an officer instead, telling her that her son had been killed

"I couldn't believe it," Tammy said. "My heart broke. It literally just ripped out of my chest. To think that my son, who was so loving and kind. His goal in life was he was actually going to school to help people for this and that someone like that shot my son. I just... I thought I was instantly just going to died. My baby. How could somebody just do that to somebody that never hurt a single soul in his life?"

Inconsolable, a teary Juanita Walborn talked about her grandson's childhood. She described him as a kid who never hung out with the bad crowd and had excellent grades. She says she raised him with her husband, who died a month ago. She's already missing their daily talks.

Luz: "What was the last thing you said to Trevor?"
Juanita: "I love you. His grandfather died last month. So after he died, Trevor called me every night. And he'd always say, 'I love you grandma,' and then I'd say, 'I love you Trevor.'"

A heartbroken grandmother in New York, who lost her husband one month ago, is opening up about the death of her grandson in the Gilroy Garlic Festival shooting.

Trevor's father describes Irby as his best friend and the perfect son.

"It's senseless there is no reason for stuff like this to happen," he said. "For a 19-year-old kid to go in and have a rampage or whatever you want to call this thing that he had, why?"

According to his parents, Irby had many dreams, including to become a father one day. His girlfriend Sarah, who he considered his fiancéé, was with him during the shooting and escaped.
When asked how they want Trevor to remembered, Tammy answered, "I want people to remember Trevor as the kindest person you'll ever find. He would never hurt anybody."

The Williams family is arranging to transport Irby's body back to New York. He will be buried next to his brother and grandfather.

"It is with profound sadness that I share the devastating news that a member of the Keuka College family was among the victims of the mass shooting over the weekend in California.

The College community today mourns Trevor Irby, a biology major who graduated in 2017. Our hearts go out to Trevor's family and loved ones. We are shocked that this latest episode of senseless gun violence resulted in the loss of one of our recent graduates-graduates in whom we place so much hope because of their potential to create a brighter tomorrow.

We also send sincere condolences to College alumna Sarah Warner, who was with Trevor at the California garlic festival where the shooting took place. We were relieved to learn that Sarah was not physically injured in the shooting. We offer our support and prayers to Sarah and her family.

When the timing is appropriate, we will schedule a vigil on campus so that those alumni, students, faculty, staff, and community members who knew Trevor and who know Sarah can join in fellowship and reflection. In the meantime, anyone wishing to reach out for comfort or support is encouraged to contact College Chaplain Eric Detar at (315) 279-5378.
Again, the College community extends its deepest sympathies to Trevor's family, friends, and to all who knew him. And we offer condolences, support, and prayers to Sarah and her family."

Additionally, Romulus Central School District confirmed he was a 2012 graduate. In a statement they wrote:

"The school community of Romulus is deeply saddened to hear of Trevor's tragic death at the Gilroy Garlic Festival in California. All of our thoughts and prayers go out to Trevor's family & friends as well as the many families who are suffering from this horrible tragedy.

Trevor was a multi-sport athlete, member of the drama club, band and friend to everyone he knew here in Romulus. Although his path had taken him far from home, he was still close to many of his classmates and is missed by everyone. Trevor was the type of student who could bring joy, laughs, and comfort to everyone he met. We are proud of his accomplishments from Romulus, Keuka College, and his most recent endeavors during his time in California. On behalf of everyone at our school, our hearts go out to all the victims of this tragedy and we pray for peace and hope to come to all involved."

A GoFundMe has been set up by Trevor's college friends to help his family with expenses.