Video: Woman suffers from brain hemorrhage after being smacked by stranger in Jamaica 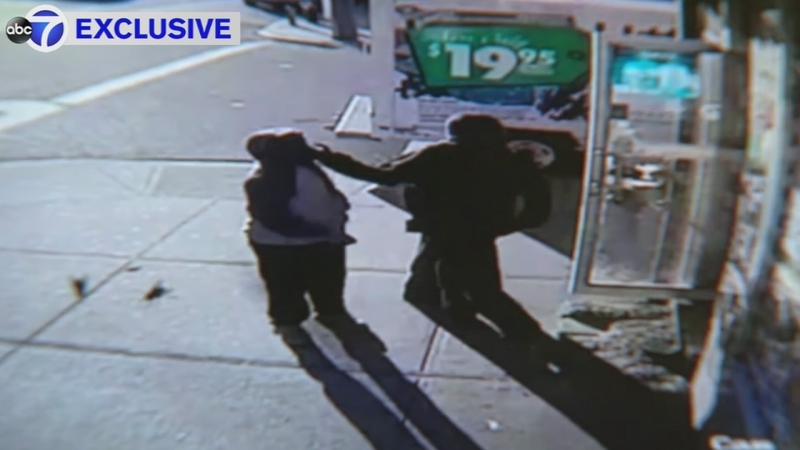 JAMAICA, Queens (WABC) -- A 69-year-old woman is recovering after being punched in the face by a stranger in Queens.

Around 8 a.m. Saturday, at the Sutphin King Deli, 107-60 Sutphin Blvd., a man approached Eve Gentillon and hit her in the head one time with a closed fist.

Surveillance video shows the suspect hitting Gentillon. The grandmother was knocked out cold after she fell to the sidewalk. Onlookers kept walking as she lay on the ground.

The individual then fled. The victim sustained a serious injury to her head and was taken to Jamaica Hospital where she was listed as stable.

Deli workers said the suspect is a regular in the neighborhood, and community leaders said anyone who knows him and doesn't come forward is no better than a co-conspirator.

Gentillon remains at Jamaica Hospital with a brain hemorrhage.

Police are looking for the suspect who was also accused of stealing beer. He is identified as Richard Springer, also known as "Kwasi." His last known address is 147-21 109 Avenue, in Queens. A picture of Springer:

He is described as black, 28, 5 feet 11 inches tall, 175 pounds, with brown eyes, black hair in corn rows, and a tattoo on his right arm of the word "Emily". He was last seen wearing a black sweatshirt, blue jeans and black boots.

Anyone with information on the case is asked to call 1-800-577-TIPS (8477) or for Spanish, 1-888-57-PISTA (74782).
Related topics:
jamaica (qn12)new york citywoman injuredknockoutwoman assaultedsurveillance video
Copyright © 2022 WABC-TV. All Rights Reserved.
TOP STORIES
NYPD increases officers, security ahead of NYC 4th of July fireworks
2 Long Island beaches expected to reopen after lifeguard bit by shark
Child found dead in Wallkill pool, adult in critical condition nearby
AccuWeather: Sunny and warm for your 4th of July
Macy's 4th of July Fireworks 2022: Everything to know
Where to watch 2022 Fourth of July fireworks
3 shot in Queens, including off-duty correction officer, police say
Show More
Bicyclist killed in hit and run; driver fled in another car with baby
2 dead, 2 seriously injured in Freehold crash
2 friends shot in cab on the way home from concert descibe incident
Motive likely not terror-related in Copenhagen mall shooting
Jayland Walker was unarmed when 8 Ohio officers opened fire on him
More TOP STORIES News