Women's March on Washington participants say why they march 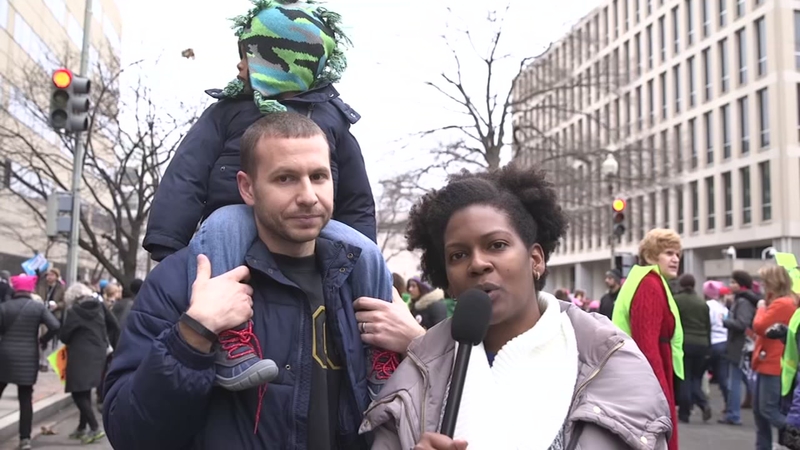 As people from around the country descended on Washington, D.C. on Saturday for the Women's March, many of them were posting about the experience with the hashtag #WhyIMarch.

We found people of the streets of D.C., and we asked them: Why do you march? The responses were as diverse as the participants themselves.

Sabina Siddiqui from Wisconsin, who was marching with a group from Virginia, said it was about having a peaceful discussion.

"We just all decided it was really important that in this environment of hateful rhetoric that we approach and show that we can all have a discussion with respect and dignity for each other," she said.

Stephany Perez-Cohen, who lives in D.C., brought her son to set an example, she said. She wanted him to see that you should speak up when you disagree with someone's politics.

Brenda Kang from Fort Lauderdale, Florida, also said she was protesting because she was worried after the election.

"We weren't happy with the results," she said. "By coming here we feel empowered to be part of the democratic process, to have a voice and to exercise our first amendment rights."

Mort and Judith Gerberg, from New York City, said they have been participating in marches since the 1960s.

"I'm marching today, specifically, because I have divine grandchildren and I don't want them to live on Mars," Judith said. "I want the planet to stay inhabitable and America to stay a true democracy, and women to have true rights."

Wayne Kye from New York said it was a positive experience and he was glad to be there with his family.

"We hope that this is a new time, a new era for America, a time for a unified voice," he said. "God bless America."
Related topics:
politicspresidential inaugurationdonald trumptrump inaugurationprotestpeace marchpresident donald trump
Copyright © 2021 WABC-TV. All Rights Reserved.
PRESIDENTIAL INAUGURATION
The Countdown: How did President Biden do in his first 100 days?
'Nailed it:' 4-year-olds recreated Obama Inauguration outfits
Poet Amanda Gorman says she was tailed by guard who thought of her as 'threat'
Michelle Obama speaks to 'GMA' in first post-inauguration interview
TOP STORIES
4 wanted in fatal shooting of man, injury of another in Queens
Legal challenges expected to private-sector vax mandate
Collapsed building in NJ to be knocked down for safety
AccuWeather: Turning colder; some snow possible tomorrow
FDNY assistant chief dies of World Trade Center-related cancer
Fire burns through 3 Newark homes, injuring 1 firefighter
Exclusive: Sade goes one-on-one with First Lady Dr. Jill Biden
Show More
Biden to warn Putin of economic pain if he invades Ukraine
Why feds are warning it could take months to get a passport
50 mutations in omicron could be its downfall, data shows
This day in history: Pearl Harbor attacked
Serial burglar steals $2200 from NYC synagogue
More TOP STORIES News