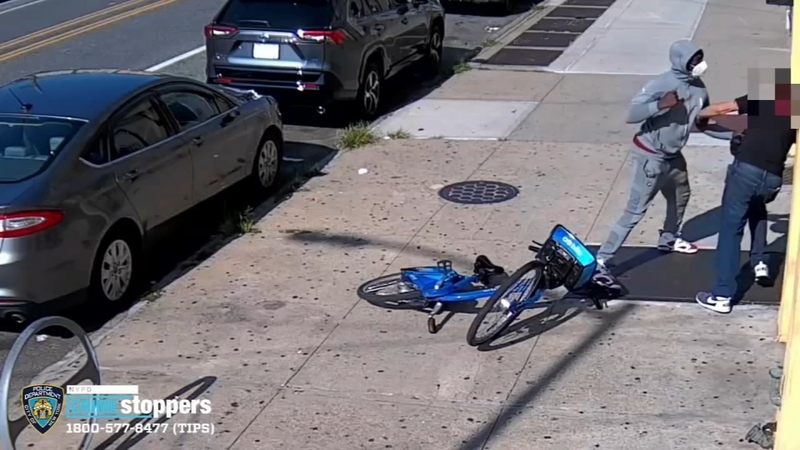 Grandfather beaten and robbed while riding Citi Bike in Brooklyn

EAST NEW YORK, Brooklyn (WABC) -- A 21-year-old man from Queens has been indicted on assault and robbery charges for a vicious daytime attack on a 68-year-old man riding a Citi Bike in Brooklyn.

The brutal beating was caught on surveillance video, leading to the arrest of Zamori Simmons, of Jamaica.

"This defendant allegedly unleashed an unprovoked and violent assault on an elderly man and continued to beat and rob him as he laid unconscious," District Attorney Eric Gonzalez said. "Such abhorrent and cruel behavior shocks the conscience, and we will now work to make sure that the defendant pays a steep price for his criminal actions."

According to the investigation, on July 24, 2021, at about 9:05 a.m., near the corner of Pitkin Avenue and Barbey Street in East New York, Simmons was allegedly accosting a woman who asked a 68-year-old-man for help.

Simmons then repeatedly punched that man until he fell to the ground, according to authorities.

Gonzalez said that as the victim laid defenseless on the ground, Simmons stomped on his head, ripped a necklace off his neck, and stole his cell phone.

He then fled on the Citi Bike, police said.

The victim lost consciousness and was treated in Brookdale Hospital for a broken wrist, multiple orbital fractures, and other injuries.

After the incident, the victim's daughter made a desperate plea for the public's help.

"I ask anybody, if you know something, please say something," she said. "Picking on the elderly...once you knocked him down, that was enough. Did you have to continue doing it, continue kicking him?"

"I was in the back making sandwiches, the lady said get your gun, but I don't have no gun," Gonzalez said. "When I went outside, he was on the floor with blood."

Gonzalez said he tended to the victim after the suspect got away.

"I just took him and put alcohol on his face," he said. "We cleaned everything, and the police came right away."

An actor best known for his work on "The Wire" was found dead in his penthouse apartment in Brooklyn on Monday.

The victim, who is known in the neighborhood, is said to be a quiet and humble man.

Simmons surrendered on August 5 and was placed under arrest.

He faces up to seven years in prison if convicted of the top count.