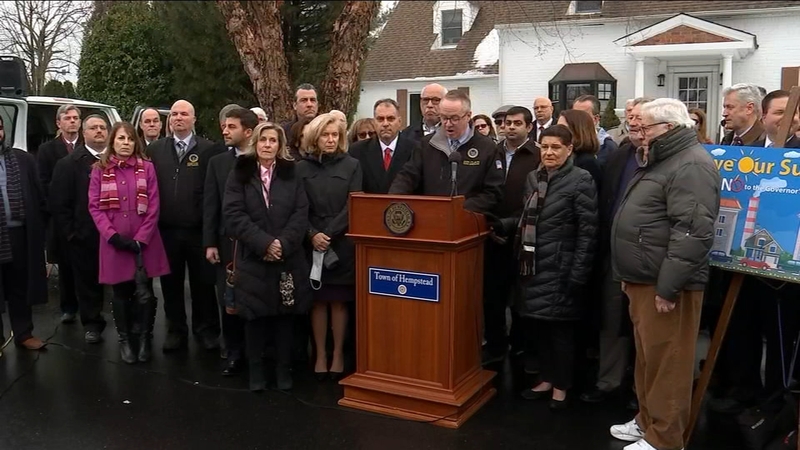 LONG ISLAND (WABC) -- Republican leaders on Long Island are slamming New York Governor Kathy Hochul for including in the New York State budget a bill that would make it easier for homeowners to make a secondary housing unit within their home or build a secondary home on their property.

Under the bill, municipalities would be required to allow at least one accessory dwelling unit, known as an ADU, per residential lot.

The units could be constructed within an existing house, like in an attic, garage or basement, or they could be an independent structure built on the property. The units could be rented, but could not be sold separately from the house.

The bill is meant to address the affordable housing crisis in the state's suburbs.

"The Tri state suburbs have not met the housing demand need," said the bill's sponsor Senator Peter Harckham (D-Carmel). "It's ironic that the same people who always scream about population fleeing New York are always the first ones to put up obstacles to more affordable housing options so people can stay."

The State said the legislation, if approved as part of the state budget, would further the rights of individual homeowners to determine how best to use their properties, provide homeowners on fixed incomes the opportunity to create additional rental income or make multi-generational housing to care for elderly relatives.

They said it could also help improve housing segregation in the suburbs.

"It will turn our neighborhoods into the overcrowded urban centers that our residents fled to come here," Town of Oyster Bay Supervisor Joseph Saladino said.

Town of Hempstead Supervisor Don Clavin said if the bill is approved people will feel the effects immediately.

Greta Guarton with the Long Island Coalition for the Homeless said the legislation would make it easier for low income people on Long Island to find housing.

"The vast majority of housing on Long Island is homeowner," she said. "There are very few rental units and many of those rental units are in large complexes, which continuously just go up in rent. Each time that happens lower income folks are always constantly pushed out and then they end up in shelters."

Guarton said rental housing on Long Island has become even more scarce since the pandemic because so many people moved out of New York City to the suburbs.

The legislation would also provide amnesty for owners of illegal apartments to come forward and make their apartments legal.