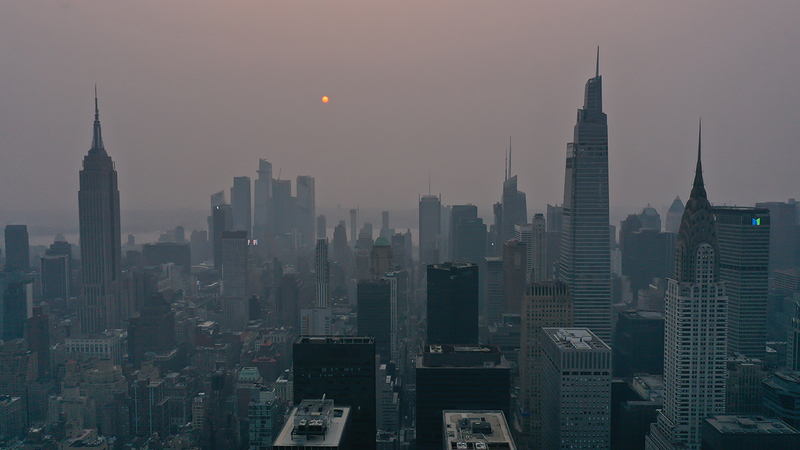 Hazy skies over Manhattan due to Western wildfires

An Air Quality Alert expired for our immediate area at midnight Wednesday, but it has been extended through 12 a.m. Thursday for Philadelphia, Allentown, PA and other areas south and west of the Tri-State region.

Haze is expected to continue in our area today before afternoon thunderstorms move across the area.

Anyone with breathing problems like asthma or heart disease should avoid being outside as the alert continues. Sam Champion said a face mask may help prevent some of that smoke from getting into your lungs.

At 5 p.m. Tuesday, the air quality reading was an unhealthy 165.

The smoke is being carried this way due to a big ridge in the jet stream, and though most of it is in the upper atmosphere, the sky may look a little milky at times.

The haziness has been very evident here in the New York City area, and at least 40 million Americans across the country have been seeing poor air quality.
EMBED More News Videos

Lee Goldberg has a live shot of the smoky haze overtaking New York City as a result of western wildfires.

A drier air mass from Canada will then start to shove some of that smoke off to the south.

The monstrous wildfire burning in Oregon has grown to a third the size of Rhode Island and spreads miles each day, but evacuations and property losses have been minimal compared with much smaller blazes in densely populated areas of California.

The fire's jaw-dropping size contrasted with its relatively small impact on people underscores the vastness of the American West and offers a reminder that Oregon, which is larger than Britain, is still a largely rural state, despite being known mostly for its largest city, Portland.

The 476-square-mile Bootleg Fire is burning 300 miles southeast of Portland in and around the Fremont-Winema National Forest, a vast expanse of old-growth forest, lakes and wildlife refuges.

If the fire were in densely populated parts of California, "it would have destroyed thousands of homes by now," said James Johnston, a researcher with Oregon State University's College of Forestry who studies historical wildfires. "But it is burning in one of the more remote areas of the lower 48 states. It's not the Bay Area out there."

At least 2,000 homes have been evacuated at some point during the fire and another 5,000 threatened. At least 70 homes and more than 100 outbuildings have gone up in flames. Thick smoke chokes the area where residents and wildlife alike have already been dealing with months of drought and extreme heat. No one has died.