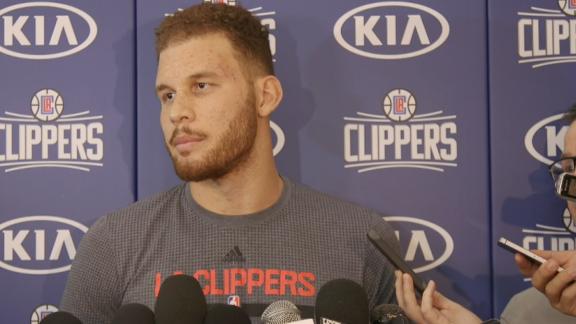 "I've told you we're not trading Blake, but I guess everyone else wants to keep doing that. So we'll let them do that," Rivers said Tuesday before practice. "It is what it is. Nothing we can do about it, honestly. It frustrates you when you know nothing's going on, but what can you do?"

Rivers would not confirm whether the Clippers have received calls from other teams interested in Griffin, who has spent his entire career with Los Angeles after being drafted No. 1 overall in 2009.

"That's none of [the media's] business. It really isn't," Rivers said. "I hate to say it. It's none of [the fans' business either]. Having said that, I think we receive phone calls on every single player, honestly. But it does frustrate me when you hear all the speculation and all that stuff. It's completely untrue."

Griffin had little to add about the trade speculation. A five-time All-Star, he has been sidelined since Dec. 26 because of a quad injury and a broken hand, which he suffered in an altercation last month with the Clippers' assistant equipment manager.

"I am probably the wrong person to ask about [trade rumors]," he said. "You probably have to ask the people that are in charge of that. I have been in trade talks before, so I don't know."

Rivers also downplayed the idea that the trade speculation involving Griffin has impacted the Clippers' psyche as a team.

"I don't think it affects us much," Rivers said. "I think Blake and his people know what's going on. I think it's affected ESPN and all the talk shows. Hopefully, it's giving them ratings if that's what they're looking for.

"But I don't think it's affected us much at all. This happens every year, unfortunately."

Griffin again apologized for the altercation with assistant equipment manager Matias Testi on Jan. 23 at a Toronto restaurant.

"I just want to say that I have had a lot of time to reflect, and that I am very truly, truly sorry for what happened," Griffin said. "It was a situation between two friends that kind of got out of hand, and I exercised poor judgment.

"I have spoken to Matias about it. I have spoken to my teammates about it ... coaches. The last people to apologize to are the fans and to show them how sorry I am for this situation. It is something that I feel awful about. It is something that I have not had to deal with ever before in life, and it has been tough. Now that the NBA has done their due diligence ... and the Clippers, and I have my punishment, I am looking forward to just moving on and moving past this and getting back on the court with my teammates."

Griffin said he has received nothing but positive support from within the organization.

"All of my teammates and everybody that I have talked to in the organization have been so positive and so helpful for me," he said. "Talking to each one, and apologizing to them, the theme has been that everybody makes mistakes. We have all done things we regret. Everybody has just said, 'Get back healthy and come back and join us.' That is my goal, to get back healthy and come join us and keep doing the things that I was doing before."

Even Testi seems ready to put the incident behind them, according to Griffin.

"I have talked to Matias tons of times since the incident," Griffin said. "He actually said it best: 'Stuff happens.' We are like brothers, and we just have to move on."

This is not the first time Griffin has been scrutinized for a public altercation. He was cleared of charges stemming from an Oct. 19, 2014, incident in which he allegedly slapped a clubgoer in Las Vegas over an unwelcome use of a camera.

Griffin said Tuesday, however, that he does not think he has an anger issue.

"I have never really struggled with that kind of problem," he said. "Those incidents were completely separate, and, no, I don't believe I need [anger management]."

Griffin was expected to be out four to six weeks following a surgery to repair a spiral fracture to the fourth metacarpal of his right hand, and that initial timetable remains in place.