Non-venomous snakes in Georgia: Most reptiles not a threat, wildlife expert says
WABC 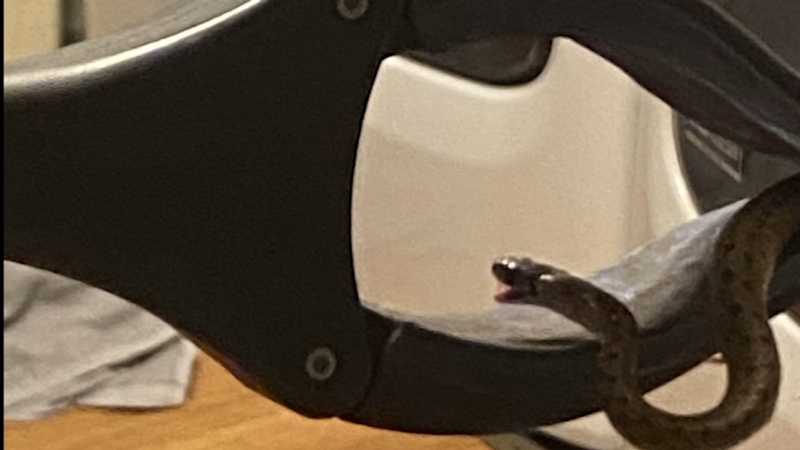 AUGUSTA, Ga. -- One Georgia family tried to go to turn in this weekend with not one, not two, but 18 snakes underneath their bed.

WJBF shared their story and what you should do if you find yourself in a similar situation.

Many people are scared of snakes, so they want and even expect them to be outside. But sometimes they end up inside your home, and that is exactly what happened to one Augusta, Georgia family.

"Before going to bed, I spotted what I thought was a piece of fuzz on the floor, went to reach for it and it moved," said Trish Wilcher, an Augusta resident.

There was something nestled underneath Trish and Max Wilcher's bed Sunday night.

A snake catcher came to a woman's rescue when she discovered a snake in her glove compartment. But the slithering creature was not going down without a fight.

"And then a second later another piece moved, and I went to my husband, 'We have snakes!'" Trish said.

The Wilcher family quickly learned there were 17 babies and a mother snake, the baby snakes recently hatching, making themselves at home. So, Max Wilcher took a grabber tool and placed each one in a linen bag.

"He brought them out there to the creek area and released them there," Trish said.

Outside of finding a place to lay their eggs, there's another reason why snakes may want to share your home. Phinizy Center for Water Sciences Environmental Educator Camilla Sherman shared some information about what draws them indoors.

RELATED: Florida scientists to study if it's safe to eat pythons

"If you have a mouse problem, the snakes are going to come and try to help you with that," she said.

Sherman said rodents are food for the creatures, so if you keep them out of your home, that's another way to rid yourself of snakes too. But this time of year, you're more likely to see them out and about.

"In the winter, when it's cold, they slow down because their body is not able to produce heat like ours is," Sherman said. "So, in the summertime, they've got plenty of heat. They are a lot more active, so you're more likely to see them."

The increase in snakes means you may come in contact with the reptile more, but Sherman said in Georgia, they are more than likely non-venomous. Bites are slightly down, with Augusta University reporting spikes during summer months.

"If you give them a way out, they're going to take it. They're not going to chase you," Sherman said.