Hunter College student has 'subway graduation' after getting stuck on train

The 22-year-old Alcantara said his E train was delayed in between stations in Queens because there was apparently a malfunction that caused the emergency brakes to trigger.

Conductors weren't able to fix it after approximately 90 minutes of trying, he said, so they called for rescue trains to remove passengers. They took around 20 to 25 minutes to arrive, and he said his rescue train was then delayed as well due to signal problems at the next station.

"Everyone seemed annoyed, and by that time, my commencement was already about an hour in," he said. "So I felt like lightening the mood and thanked everyone for 'coming to my graduation.' Told them it meant a lot to me, and they applauded it."

Alcantara, graduating from Hunter-Bellevue School of Nursing, was then given a special graduation ceremony on the train by other riders. Nadiya Afzal shot the entire thing with her cell phone.

"I've witnessed a lot of things on the trains, but this was a very special moment," she said. "It was just a nice moment, to see we all came together for him. He deserved it."

As music played from a portable speaker, Alcantara's family watched his friend Bobby got in position to make it official, presenting Alcantara with a "diploma" on his cell phone. 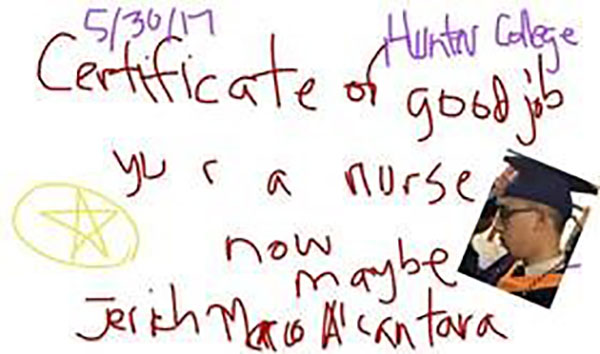 "He handed me his iPhone with the diploma on it, shook hands and everything, as if he was a dean," he said.

Meanwhile, back at the real graduation ceremony, Alcantara's friends were wondering where he was.

"He was all excited about it," friend Tara Liu said. "He was all about getting extra tassels for graduation."

Alcantara ended up missing the entire ceremony, but still, his friends rallied. So did he regret being on the train instead? Absolutely not, he says.

"I think it ended up so much better than if I was on time," he said. "I would have probably fell asleep if I was at commencement."
Related topics:
educationnew york citygraduationsubway
Copyright © 2021 WABC-TV. All Rights Reserved.
More Videos
From CNN Newsource affiliates
TOP STORIES