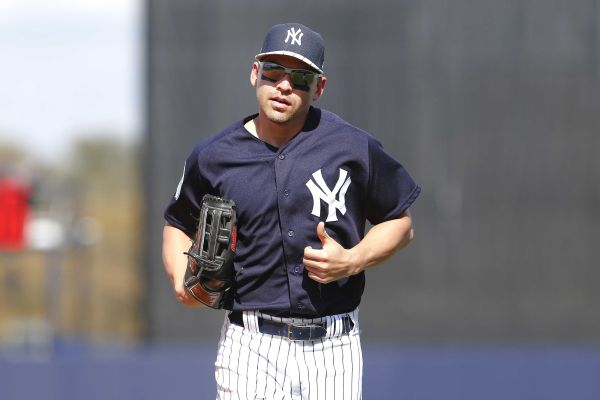 Ellsbury was hurt when he crashed into the wall catching a drive by Kansas City's Alcides Escobar on the first pitch of a game on May 24.

"I'm feeling better. I still have some headaches, but I talked to the doc and we're definitely making progress," Ellsbury said. "Some days are a little bit better than others."

"The headaches have been gone at times, but it seems like when we start some activity they come back," manager Joe Girardi said.

Ellsbury is batting .281 with four homers, 14 RBIs and eight stolen bases in 39 games.

Meanwhile, closer Aroldis Chapman, out since May 12 with rotator cuff inflammation, is to throw a simulated game on Friday or Saturday at the Yankees' facility in Tampa, Florida, and then could start a minor league injury rehabilitation assignment before he is activated.

"There was original discussion of him throwing here, and I don't think he'd get a whole lot of volunteers for hitters," Girardi said.

First baseman Greg Bird, who hasn't appeared for the Yankees since May 1 because of a bruised right ankle, is to play for Triple-A Scranton/Wilkes-Barre at Lehigh Valley on Friday night after going 6-for-20 with three doubles and a home run in six games at Class A Tampa.

Girardi said Masahiro Tanaka remains on track to start Sunday's homestand finale against Baltimore but avoided a direct answer when asked whether it was possible the struggling pitcher could be pushed back a day to Monday at the Los Angeles Angels.

"It's basically up to the manager," Tanaka said through a translator.

Pitching coach Larry Rothschild has identified Tanaka's mechanical problems, according to Girardi, but the 28-year-old right-hander has had difficulty repeating his motion consistently.