Shohei Otani: 'Hope to do my best in America from next year on' 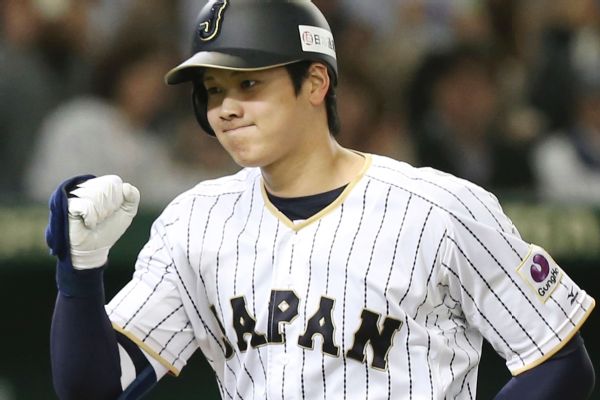 "The other day I met with team officials and stated my intentions," Otani said at a news conference. "My request was met with warm words of support, so I hope to do my best in America from next year on."

Otani's Japanese club, the Nippon Ham Fighters, said Friday they will allow Otani to use the posting system this offseason, clearing the way for him to sign with a major league team next season.

Because Otani has less than nine years of service time, Nippon Ham retains his rights and he must go through the posting system to leave.

If MLB, the MLB Players Association and Nippon Professional Baseball agree to a deal that would extend the expired posting agreement through this offseason, the team that Otani signs with would pay the Fighters $20 million. Under MLB's labor contract, his signing bonus is restricted and remaining pool money is limited to a high of $3,535,000.

Under baseball's new collective bargaining agreement, Otani can only agree to a minor league contract that is subject to signing bonus pools. If added to a big league roster, he would have a salary for about the minimum $545,000 next season and not be eligible for salary arbitration until 2020 at the earliest.

If he was to wait until he is 25 to enter MLB, there would be no restrictions and he likely would get a deal. But Otani said he wanted to go now rather than wait.

"I am not yet a complete player yet, and I want to go to an environment where I can continue to get better," said Otani. "I felt the same way when I graduated from high school. And it is my strongest reason for wanting to go now."

Otani considered going straight to MLB out of high school but was convinced to sign with the Fighters as they assured him he could play the outfield as well as pitch.

His injury problems this season stemmed from last year's Japan Series when he injured himself running the bases.

Otani, who had ankle surgery last month and is currently undergoing rehabilitation, just completed his fifth season with the Sapporo-based Fighters.

He said during Saturday's news conference that he hopes to be able to continue both batting and pitching.

"Just before I turned professional, I didn't imagine I would be able to do both," Otani said. "But since then, the fans have encouraged it, the coaches helped me, and manager (Hideki) Kuriyama made it possible. That has left me with a strong desire, to keep doing it, not only for me, but for them."

"I don't know if it will be possible, but I want to hear what teams over there say and what kind of situations might be available. Until that process has started, I can't say how it might work out."
Report a correction or typo
Related topics:
sportsespnshohei otanitexas rangersposting systemmlbminnesota twinsjapannew york yankeesnippon ham fighters
Copyright © 2021 ESPN Internet Ventures. All rights reserved.
More Videos
From CNN Newsource affiliates
TOP STORIES