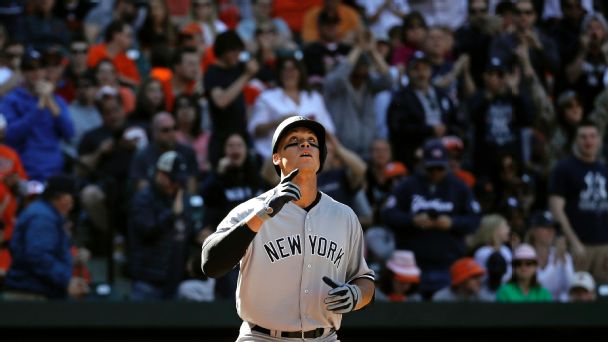 A year ago, Aaron Judge was considered more likely to be a bust than a future Rookie of the Year, MVP candidate and maybe even the new face of baseball.

In 2016, he struck out in half of his 84 at-bats. When the next spring training arrived, he had to win the right-field job over Aaron Hicks -- and nearly lost it.

But the New York Yankees gave him a shot, and, on Monday, he was named the American League Rookie of the Year.

On Thursday, maybe he'll be named MVP, too.

Judge hit a rookie-record 52 home runs and acted like Derek Jeter's understudy in how to handle fame in New York. Along the way, he put together a string of memorable moments.

But by posting a .975 OPS, Judge ultimately won the case with the Yankees' hierarchy -- just days before Opening Day.

"Now, the real work starts," Judge said after getting the good news. "Now, I'm trying to keep it. It's great, but now I just have to go out there and work."

Through the first five games of the season, the concerns about Judge seemed well-founded. He was hitting .133 and had yet to go deep.

But, the Yankees down a run in the eighth inning at Camden Yards in Game 6, he smacked a solo homer off Orioles reliever Mychal Givens in an eventual 7-3 win.

Judge would go on to hit homers in each of the next three games.

It was one of the craziest games of the regular season, a game the Yankees won 14-11 over Baltimore in the Bronx after trailing 9-1 heading into the bottom of the sixth inning.

Judge went deep in both the fifth (a solo shot) and the sixth (a two-run blast), helping the Yankees mount their comeback. The Bombers ultimately scored three in the ninth and three more in the 10th for the victory on what was a pretty good day for the No. 7 hitter in their order.

In fact, after Matt Holliday hit the game-winning three-run homer, Yanks radio play-by-play announcer John Sterling said, "That's the kind game you put on cassette! Or a DVD or a CD or whatever!"

May 22: The Judge's Chambers opens at Yankee Stadium

Never before had the Yankees dedicated an entire section of their stadium to an active player. Though a low-cost production -- some wood paneling and a few robes and foam gavels handed out to fans lucky enough to snag a seat -- it was a big deal.

Still, the move invited criticism. Though Judge had already become one of the biggest stories in baseball, there were questions about whether his early-season success -- which included 15 home runs in his first 40 games -- would last.

Well, it worked out. Even U.S. Supreme Court Justice Sonia Sotomayor had taken a seat in the section by the end of August.

Judge again displayed his devastating power against the Orioles, nailing a moonshot well over the bleachers in left field at Yankee Stadium.

It was not only how he crushed the ball -- the longest home run in the new stadium's history -- that made it special, but the absolute awe on the faces of teammates such asBrett Gardner and Didi Gregorius in the dugout.

The only Yankee not impressed? Aaron Judge. "If I know it's going over the fence, I am going to start jogging and just get around the bases and get back in the dugout," he said.

It wasn't just that Judge broke Joltin' Joe's 81-year-old record with a solo shot at home against the Brewers, it was how quickly he did it.

While DiMaggio needed nearly 600 at-bats to reach 29 homers in 1936, Judge hit his 30th in just his 293rd at-bat of the season. Appropriately enough, the ball ended up landing on the netting that protects Monument Park, where Joe D. is immortalized in granite.

Still, with the slumping Yankees in the midst of a brutal stretch, Judge was reluctant to talk about it.

If there was a time when Judge really became a centerpiece of the game, it was in Miami at the All-Star Game. His batting practices had already become legendary, leading to grand expectations for the Home Run Derby heading into the All-Star break.

Judge delivered, winning it in style by outblasting Justin Bour, Cody Bellinger and Miguel Sano-- with time to spare. His performance inspired MLB commissioner Rob Manfred to assert Judge is the kind of player "who can become the face of the game."

As for Judge, he played it cool. "I had no pressure going into it. I'm a rookie. This is my first time doing it. For me, I've got no expectations," Judge said. "It was a blast. I enjoyed every minute of it -- watching the other guys swing, coming here early and talking to the media. Everything about today was fantastic."

After struggling in late July and August, following the Home Run Derby, Judge heated up in September, having by far his best month of 2017. Judge smashed 15 home runs in 27 games to lead the Yankees into the playoffs, and he went from talk of moving down in the lineup to moving up in the MVP race.

Despite the enormity of the achievement, Judge had to be pushed by his teammates to take a curtain call.

October: Helps lead Yanks to within a win of the World Series

In October especially, Jeter had a knack for big plays in big moments. Judge showed some propensity for that, making the biggest play of his season, and probably the biggest of his team's season -- not with his bat, but with his glove.

In Game 3 of the American League Division Series, with the score tied in the sixth and the Yankees a loss away from elimination, Judge used all of his 6-foot-7 frame to rob a two-run home run from Cleveland's Francisco Lindor. He made it look easy, but without the catch, the Yankees might have been swept by the defending AL champs instead of battling back and advancing all the way to Game 7 of the AL Championship Series against the Astros -- a series in which Judge hit three homers and drove in seven runs.

Still, that wasn't enough for Judge.

To think of where Judge began this year -- not guaranteed a job, potentially a bust -- to where he ended it, as a unanimous choice for Rookie of the Year, is simply amazing.

Houston's Jose Altuve has the World Series title, but if Judge wins the MVP award, no one should quibble.