Congestion pricing: Driving in Manhattan could cost you 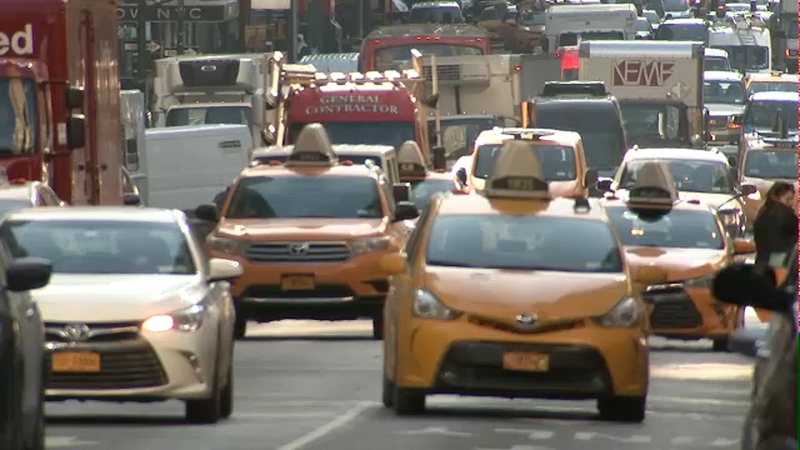 Congestion pricing: Driving in Manhattan could cost you

NEW YORK (WABC) -- Drivers may have to pay to come into the busiest parts of Manhattan under a new proposal commissioned by Democratic Gov. Andrew Cuomo to ease traffic congestion and raise vital funds for mass transit.

If the proposal is approved by lawmakers, tolling would take effect from 6 a.m. to 8 p.m. weekdays below 60th Street for a total of $11.52 a day. Trucks would pay even more - $25.34 - while taxi cabs, Uber rides and for-hire vehicles would be charged between $2 and $5 per ride.

London and Singapore already have similar congestion surcharges in place, and supporters of the idea say it will address gridlock and raise money for mass transit. But the proposal is expected to face stiff opposition in the Legislature, which must approve portions of the plan.

Mayor Bill de Blasio says he'd like a guarantee that funds raised under the proposal would be used for public transportation in New York City. He said the plan "certainly shows improvement over previous plans we have seen over the years," but believes his proposal of a millionaires tax is still the "most reliable, most verifiable way to get that permanent funding for the MTA."

Similar plans have failed before, after concerns were raised about the impact on commuters. Ten years ago, Mayor Michael Bloomberg proposed a similar plan, but it never gained traction. So what changed in the last decade? There have never been more people living in the city, and traffic is only getting worse.

Cuomo appointed a 16-member panel called Fix NYC in October to come up with plans to implement congestion pricing. He stopped short of fully endorsing the proposal's details, but he said it's clear something must be done to address traffic and raise money for a subway system beset by breakdowns and delays. He noted that as a Queens native, he's sensitive to the concerns of commuters.

"I have outer borough blood in my veins, and it is my priority that we keep costs down for hard working New Yorkers and encourage use of mass transit," he said.

Only 4 percent of those who live in Queens, the Bronx, Brooklyn or Staten Island commute to Manhattan in a vehicle, according to figures released by the task force. Of those commuters, fewer than 5,000 are considered poor.

Fernando Ferrer, former Bronx Borough President and a Metropolitan Transportation Authority board member who served on a task force, believes congestion pricing is a must do.

"There's no good time to do something that's bold and makes sense, but look at the traffic here," he said while speaking on 3rd Avenue earlier this week. "There isn't a God-given right to prevent people from going one place to another; to cruise in a taxi, to deliver at-will, to stop, block traffic, double-park and triple park. That's over."

AAA Northeast released a statement Friday in opposition of the plan, which it said offers no benefits for drivers while only moderately reducing congestion. Here is the full text of the statement:

The Fix NYC Advisory Panel Report offers no benefit for drivers while using them as the sole source of revenue for the bailout of the MTA. The report purportedly aims to reduce congestion, but its first performance measure is the amount of money generated. The report envisions a negligible increase of vehicle speeds from 6.8 mph to 7.4 mph as a measure of reduced congestion.

"A billion dollars in tolls for less than a one mile-per-hour improvement seems like a bad deal," said Robert Sinclair, Jr., manager of media relations for AAA Northeast.

The plan offers no toll reductions for drivers on outer borough bridges who have limited transit alternatives. Additionally, the plan allocates no new revenue for road, bridge or tunnel improvements. The plan further fails to offer any mitigation of the increased congestion that would occur in the areas outside the Manhattan Central Business District as drivers try to find ways to avoid the fee.

The panel's recommendations, if implemented, would establish a new revenue stream to bailout the MTA without fully addressing the underlying causes of the Authority's fiscal problems.

In short, the report is a starting point for discussion and AAA is encouraged that the Governor has suggested reducing tolls for outer borough drivers.

You can download the full Fix NYC proposal by clicking here.