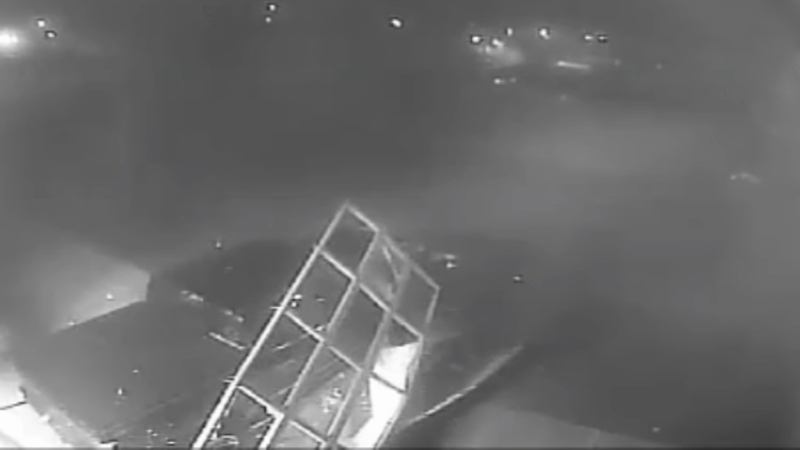 Man steals truck by driving through plate-glass window of dealership

BURLINGTON, New Jersey -- Police said a man went to extreme measures to steal a truck from a car dealership in South Jersey, and he left an expensive mess behind.

Surveillance video captured the man driving a 2017 customized Chevy Silverado through the double-paned glass door of the Burlington Chevrolet dealership over the weekend. The truck had been in the service center of the dealership.

"The first time seeing the video is unbelievable, it's like watching a movie," general manager John Broderick said. "In 20 years, I've never had to deal with that before."

The surveillance cameras also caught the suspect on the lot, as well as breaking into the dealership.

"There were several vehicles with the keys in them in service locked inside," Broderick said. "We had a cleaning crew here, which is why the alarm wasn't set. He was either very lucky or very good."

The damage was so extensive at the dealership that they had to remove the door and replace it with plywood. The car is not in good shape, either.

Police told the management of the dealership that the suspect took officers on a ride, at some points hitting 100 mph.

"The police chased him, gave a pursuit through several different townships," Broderick said. "He went on to commit another robbery in Mount Holly, and (police) found the truck in Camden."

The crime unfolded in the overnight hours between Saturday night and Sunday morning, near Route 130 and Lawrence.

Broderick said he is working with the owners of the vehicle to replace the truck.

Burlington Chevrolet is offering a $2,500 reward for information leading to the arrest of the man caught on camera stealing the truck.