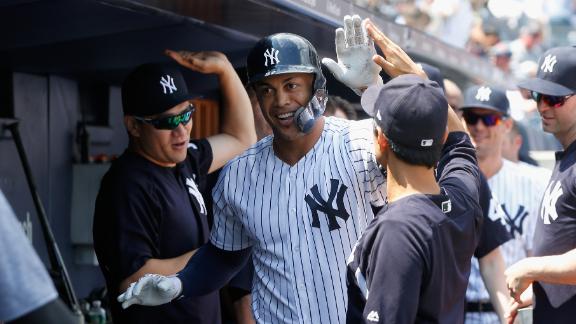 ESPN
NEW YORK -- Traded to the Yankees after the 2014 season, Didi Gregorius had the unenviable task of following Derek Jeter as New York's new shortstop.

A smooth fit, it's been.

Gregorius homered and turned in a pair of nifty defensive plays as the Yankees defeated the Texas Rangers 7-2 on Sunday.

Gregorius has been praised by his manager and teammates for his play on the field and his leadership in the clubhouse. Just like his predecessor.

"Taking over for who he took over for and being able to have three 20-homer seasons in a row, it's incredible," winning pitcher CC Sabathia said. "If he wouldn't have came in and did what he did the last three or four years, we'd still be talking about Jeet' and how we need leadership."

The postgame talk was about Gregorius' fifth-inning gem.

The 28-year-old slid to his right to cut off a grounder in the hole by Delino DeShields, rose to his feet and fired a perfect throw to first in one smooth motion, nabbing the Texas speedster by a half-step.

The crowd chanted his name after the play and Gregorius smiled and tipped his cap.

DeShields was activated from the seven-day concussion disabled list earlier in the day.

Said Sabathia: "That was one of the better plays I've ever seen at shortstop."

Joey Gallo had two hits for Texas, which dropped three of the four games in the series. He also reached over the left-field wall to take a home run away from Austin Romine in the eighth.

Sabathia (7-4) struck out seven to win for the first time since July 4. The burly left-hander allowed just one ball out of the infield and lowered his ERA to 3.32 -- the 38-year-old has not finished a season with an ERA lower than 3.38 since 2011.

Stanton hit his 30th home run, giving New York a first-inning lead for the second straight day, connecting off Martin Perez (2-5). Stanton has the most home runs by any Yankees player in his first season with the team since Mark Teixeira hit 39 in 2009.

The Yankees scored five times in the fifth to chase Perez. Aaron Hicks hit a two-run single and Gregorius capped the burst with his 21st homer.

"A really active day for me," Gregorius joked.

The shortstop also made a slick backhanded play in the first.

"Oh, man, he did it all," New York manager Aaron Boone said.

Texas scored twice in the seventh against Sonny Gray. DeShields drove in a run with an infield single.

Gray ran into trouble again in the eighth, allowing the first two batters to reach, but Jonathan Holder wiggled out of the jam with a pair of strikeouts. Expected to be a key component of New York's rotation, Gray has given up nine earned runs over his last 5 2/3 innings since being moved to the bullpen.

New York Yankees trainer Steve Donohue was awarded the National Athletic Trainer Association's Most Distinguished Athletic Award. Now in his 40th consecutive season in the organization, and seventh as the team's head athletic trainer, Donohue became part of a viral video earlier in the week when he was captured on film removing a moth from umpire Bruce Dreckman's left ear.

Yankees: Stanton continues to be limited by a sore left hamstring that keeps him in a designated hitter role. Boone commented that Stanton's ability to play the field is examined daily. . OF Clint Frazier (post-concussion migraines) was able to hit in the batting cage Saturday, but continues to experience symptoms.

Rangers: OF Nomar Mazara (right thumb sprain) was again limited to designated hitter duties with Triple-A Round Rock on Saturday.

Yankees: RHP Luis Severino (15-5, 3.11 ERA) pitches for the Yankees against Mets ace RHP Jacob deGrom (6-7, 1.77 ERA) Monday to close out the Subway Series on what was originally an off-day for both teams. The game was scheduled for July 22, but was postponed because of heavy rain. Severino's 15 wins lead the AL. DeGrom continues to lead the majors in ERA and is coming off his first victory since June 18.

Rangers: RHP Bartolo Colon (6-10, 5.18) pitches against RHP Zack Greinke (12-7, 2.89 ERA) as Texas opens a two-game interleague matchup with Arizona. Colon allowed four runs over seven innings to defeat Seattle on Aug. 7, passing Dennis Martinez to become the career leader for most wins in MLB by a pitcher from Latin America.