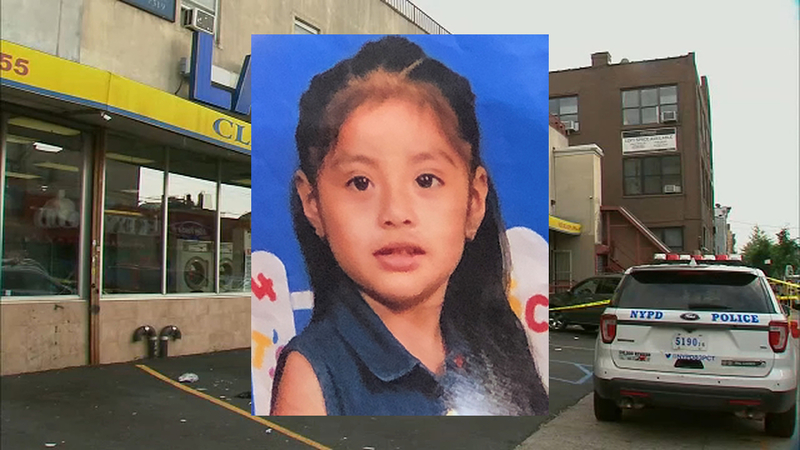 BUSHWICK, Brooklyn (WABC) -- The heartbroken mother who watched as her young daughter was killed by a car backing up in Brooklyn spoke publicly for the first time on Wednesday night as the girl was honored in a march at the scene of the tragedy.

It's amazing Reyna Cabrera has the strength even to stand, much less march to the spot where just days ago she watched her 4-year-old daughter Luz Gonzalez die.

On Sunday, the two were walking in front of a laundromat in Bushwick, with Luz on her pink scooter. The little girl lost her shoe and ran back to get it, which happened just as an SUV was backing out of its space and drove over her.

Police say the driver was oblivious to what she had done and was seen continuing down the sidewalk to leave the area.

Wednesday night the family marched to that now hallowed spot along with Brooklyn Borough President Eric Adams, who was armed with a horrifying statistic.

"She's the ninth child that was killed by a driver this year," Adams said. "More children than in 2017. Nine children were killed."

Police ruled this an accident and declined to charge the driver.

But the city is now investigating the legality of a parking lot like few others, with hand painted markers directing cars to drive on the sidewalk to get in and out.

In the laundromat on Wednesday night, Eyewitness News couldn't find anyone in charge. Though a regular customer said in his opinion this lot was a tragedy waiting to happen.

"The street is blocked by all these cars and there's no way to get in or get out, so what they do when they leave, they just drive on the sidewalk, so there's a blind side when they come out," customer Jose Lajara said.

"We really want this parking lot to be closed," Luz's grandmother Fabiola Mendieta said. "Because there is a lot of families around these blocks, they have kids and we just want safety for our kids. That's what we want."

That's what they have at least for now, with police barricades now blocking off the lot to vehicular access as a memorial grows.

It'll be up to city inspectors to figure out what if any codes have been violated here and if so, by whom. Of course, all of it is too late for Luz Gonzalez.