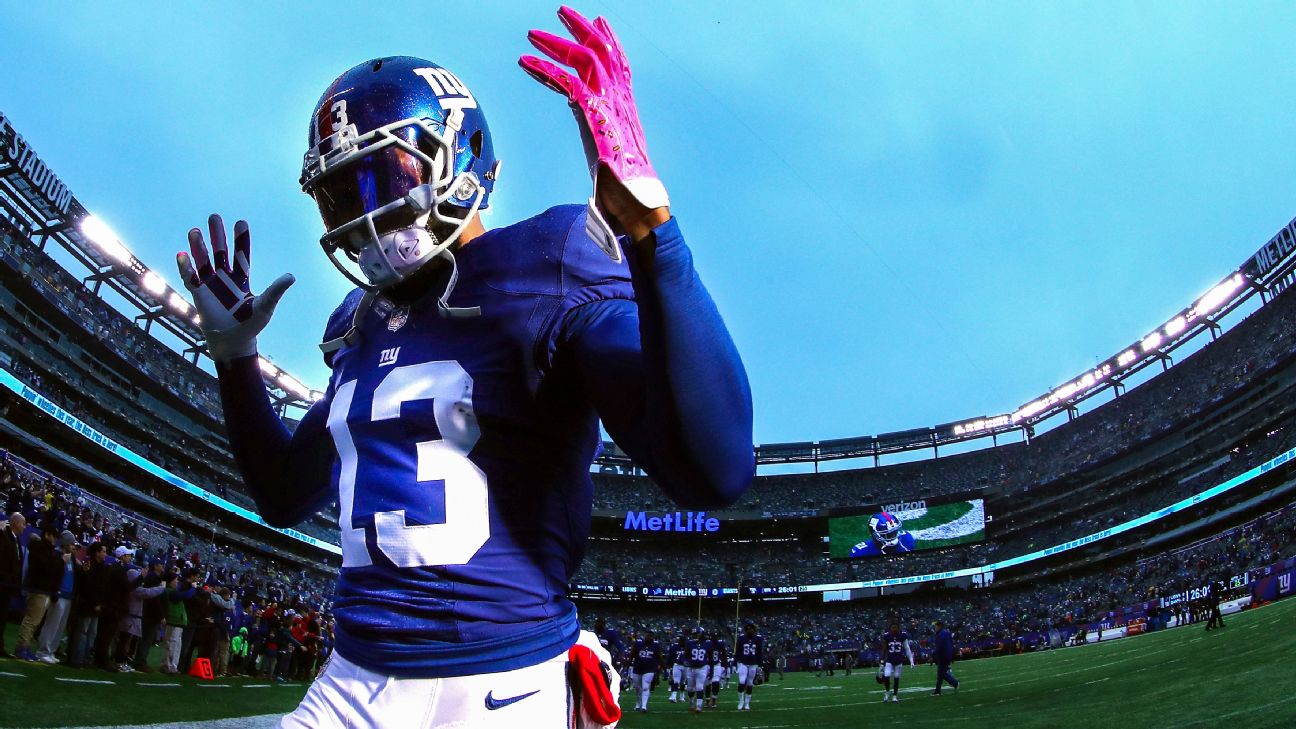 EAST RUTHERFORD, N.J. -- A day after signing a contract that made him the highest-paid wide receiver in NFL history, Odell Beckham Jr. was happy to have the deal out of the way and wants to concentrate on football.

Beckham had waited patiently for a new deal. He was confident it was going to happen, even while most of the wide receivers from his draft class were paid before him. Still, to get it done before the start of this season -- with almost two weeks to spare -- was a relief.

"Now that it's behind me and there are no worries, it feels like a weight lifted off my shoulders," Beckham said.

The deal happened after he broke his ankle in October, heard his name in trade talks in March and waited until the final days of July before the Giants began negotiations on a new deal.

Co-owner John Mara noted that the way Beckham handled himself over the past few months was paramount in getting a new deal done. The Giants eventually gave their top playmaker a five-year extension that maxes out at $95 million and includes a total guarantee of $65 million.

Mara pointed specifically to Beckham taking part in joint practices in Detroit earlier this month as the moment that checked the final box.

Beckham had left the negotiations in the hands of his agent Zeke Sandhu. He tried to concentrate on playing football and continuing to develop a strong relationship with the new regime led by coach Pat Shurmur.

Having the contract finalized was still a huge obstacle cleared before the Sept. 9 season opener against the Jacksonville Jaguars, when Beckham will return to the field for the first time since breaking his ankle.

"I can't say that I wasn't worried about it, because it was in the back of your head because there is no way that you can't worry about it," Beckham said. "But just knowing that it would be all right, that it would be worked out, and put that trust in the man above and Zeke and the Giants to get it all done. And it happened, right on time."

It wasn't always a certainty that Beckham and the Giants would reach this point. The Giants left the window open at the NFL meetings in March for teams to put in trade offers for Beckham. They didn't have him on the block, but they were willing to listen.

Beckham called it rumors and noise when asked about it several weeks back. Mara downplayed it again after Beckham signed his new deal.

"I think a lot of you overreacted to that. You were asking me if anyone is untouchable. There is nobody that is untouchable, especially when you're coming off 3-13," Mara said. "So are we going to listen to phone calls when they come in? Yeah, of course you're going to do that. It would be irresponsible not to. But it was always our intention he would be part of this team."

Five months later, Beckham is signed with the Giants through the 2023 season. His $18 million per season average and guaranteed money are records for a wide receiver.

Beckham's $65 million in total guarantees is tied for the ninth-most (with quarterback Eli Manning) among all current players.

The Giants weren't concerned that Beckham's salary is in that range.

"Not really. I don't think it's completely out of line in the wide receiver market," Mara said. "It was pretty apparent that we were going to make him the highest-paid wide receiver, for now. I think the deal makes sense for both of us."

Beckham stated publicly last year he wanted to be the NFL's highest-paid player. He mentioned Tuesday that wasn't realistic, especially after seeing Matt Ryan's new deal at $30 million per season. Quarterbacks are at a different level.

Beckham views his new deal as simply the beginning. He insists that he's not going to slack off now that he is financially set for life. He still has plenty to accomplish.

"It's not really where I want to be. Like I said, before I was even in the NFL, I want to be legendary. Yeah, the money is great. You can take care of your family. You can take care of kids one day that you'll possibly have. But my goal was always to be in the Hall of Fame, to win trophies, to be able to leave a legacy past any money that you make."

OBJ has 'very good' relationship with Shurmur
Odell Beckham Jr. speaks to the relationship that he and Giants head coach Pat Shurmur have been able to build since Shurmur's hiring.