Kyrie Irving and the NBA's superstars are going all-in 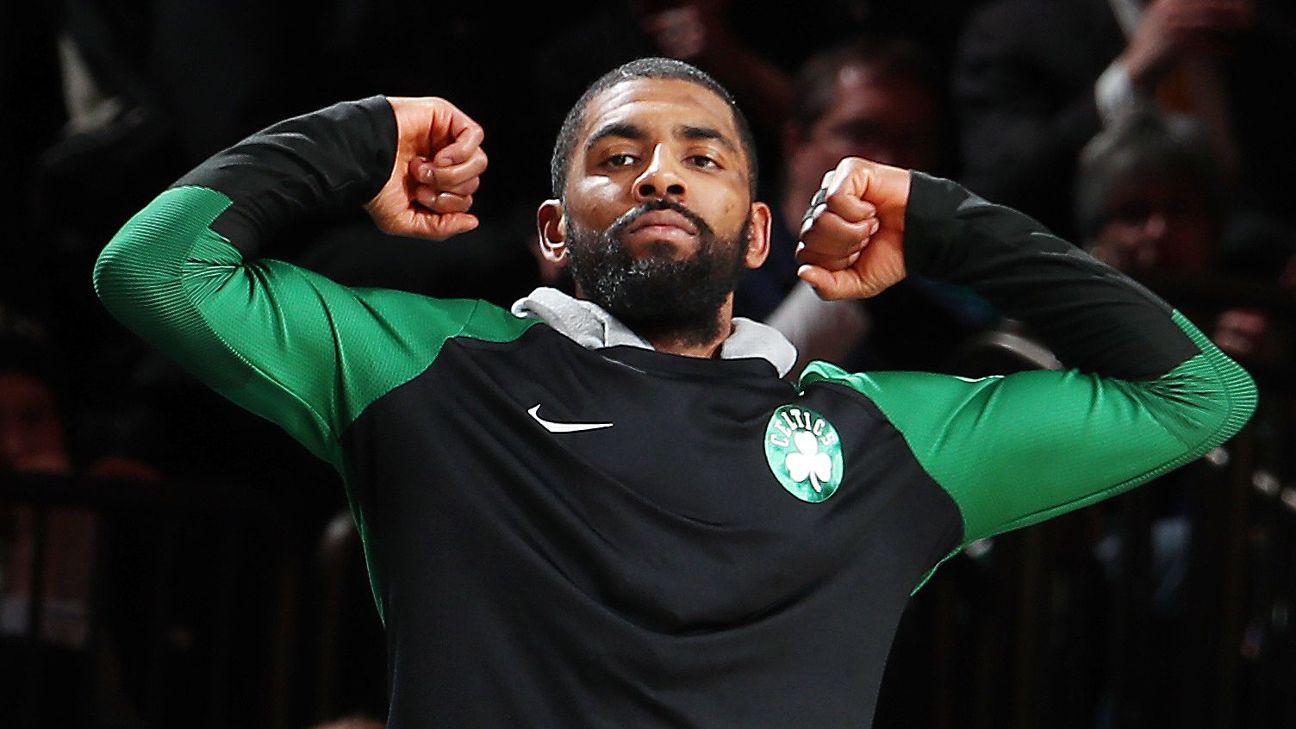 ESPN
By Tim Bontemps
NEW YORK -- After the Boston Celtics beat the New York Knicks113-99 at Madison Square Garden on Friday night, Celtics star Kyrie Irving delayed his walk-off interview to make sure his father, Drederick, could come down to the court and receive Irving's black No. 11 game jersey.

The symbolism of the moment was inescapable. Just a few short months ago, Irving both declared he was going to re-sign with the Celtics this summer and filmed a commercial with his father in which he professed his hope that same No. 11 would be hanging from the rafters a couple of hundred miles northeast at TD Garden someday.

But only a few short hours earlier, Irving, seated not far from where he waited for his father after the game, essentially told the Celtics they were going to have to endure a wait of their own.

"Ask me July 1," Irving said, when asked if he remains committed to Boston beyond this season.

With less than a week to go to the NBA trade deadline, the NBA has essentially turned into an escalating series of all-in poker hands, with all of them centered on the same mindset: The players, not the teams, control all levers of power in the NBA.

From Rich Paul's public declaration that Anthony Davis wanted to leave the New Orleans Pelicans, to the Knicks tradingKristaps Porzingis to open the door to signing Kevin Durant and Irving as free agents this summer, to Irving declining to recommit to his pledge to remain in Boston long term, it is the players, and their agents, dictating what is happening next.

As for the league's teams? They're scrambling just to try to keep up.

The Davis talks, in particular, have thrown the league into flux in a way it rarely has been before. That has come to include Irving, whose name has been thrust into the middle of all that has happened with Davis and the Pelicans, as well as Porzingis and the Knicks. As the rumors of where Davis might wind up -- and what New York might do with its sudden massive amount of cap space -- picked up speed, Irving's name was continually linked to both of them.

But while Irving said all the right things before this season began, things haven't gone according to plan during it, as virtually everyone involved with the Celtics has been some combination of disappointed and frustrated by how this season has played out so far. That has been especially true with regard to Irving, multiple sources said, due to a variety of factors.

Irving is undoubtedly playing the best basketball of his career -- but it hasn't translated to wins. The Celtics are, in theory, more talented than the team that reached Game 7 of the Eastern Conference finals without Irving and Gordon Hayward last season. But Boston is in fourth place in the East, getting there only after Friday's win thanks in part to the Indiana Pacers plummeting after losing Victor Oladipo for the season because of a torn quad tendon.

Irving's frustrations have spilled over to other members of the team. He has repeatedly aired his grievances with Boston's young players -- Jayson Tatum, Jaylen Brown and Terry Rozier -- through the media, including after a loss in Orlando last month. It was after that same loss that Irving confronted coach Brad Stevens in the huddle for not calling the potential game-deciding shot for him, and Hayward on the court afterward for passing the ball to Tatum instead of him.

The young players have, in turn, been frustrated with Irving. Hayward, meanwhile, was supposed to be Irving's co-star when he signed with the Celtics in 2017. Instead, his Boston tenure began with the devastating broken leg and ankle he suffered in last season's opening game, and he has spent this season trying to get back to the player he was before, leading to frustration being directed at him (as unfair as it might be) from all sides. The result has been Irving often having to try to carry the Celtics to wins on his own against Boston's toughest opponents.

Even after his declaration last fall that he'd be staying in Boston, Irving indicated that he would have been very intrigued by the Knicks in free agency. So after New York opened up the space to potentially sign both him and Durant, with whom he's friendly, in July, the level of concern about Irving's future in Boston has justifiably increased.

"At the end of the day, like I said, I've spent the last eight years trying to do what everybody else wanted me to do in terms [of] making my decisions and trying to validate through the media, through other personnel, managers, anybody in this business," Irving said.

The idea of Durant and Irving playing together in New York had been whispered about previously. But now that the Knicks have cleared a path to signing both of them outright, it has quickly exploded into full-on speculation. It has been thought for months that Durant's most logical destination, should he choose to leave Golden State, would be to come East and join the Knicks. Several rival teams this week said that is their full expectation -- and that was before the Knicks, clearly feeling confident about their chances, used Porzingis to push all their chips to the center of the table.

None of this, of course, has any impact on Golden State's thinking, sources said. Even if Durant went to team brass and said there was no chance he was coming back this summer -- and, to be clear, that hasn't happened -- it's not as if the Warriors would consider the possibility of trading him. Their plan, as it has been all season, is to go win a third straight title this spring, see what happens this summer and then act accordingly.

With all that said, July is far away, and there are many Knicks fans here who woke up Friday feeling like the equivalent of Charlie Brown trying to kick the football, only to have Lucy rip it away again. And, truthfully, who could blame them? Remarkably, the Knicks have not signed a first-round pick to a second long-term contract since Charlie Ward -- whom they drafted 25 years ago. In a league full of mind-boggling numbers, that might be the single most unbelievable one.

Porzingis was supposed to, finally, change that. But then came the frayed relationship with the organization under Phil Jackson, then the torn ACL that knocked him out for the final months of last season and all of this one, which set the stage for Thursday's stunning events, even by Knicks standards.

It has been an open secret in the NBA for months that the Knicks have been exploring every avenue to create max salary slots for this offseason, in pursuit of landing Durant and a second star this summer. Rival executives were salivating over the possibility of the Knicks securing a commitment from Durant and another star this summer, only for them to then have to find a way to create the space necessary to actually sign them. Some thought the price for doing so could be up to as many as three future first-round picks, which fits right in line with the roughly $18 million to $20 million rate per pick the league has essentially come to when determining the value of a first-rounder to dump salary.

And, for all of The Garden's spin Thursday that this was about Porzingis declaring he wanted to leave New York, in reality, it was the opposite: The Knicks, rightly or wrongly, clearly were not convinced Porzingis was worth offering a max contract this summer. No player in NBA history has turned down a max contract offer coming off a rookie scale contract. It seems unlikely that Porzingis, no matter his level of frustration with the Knicks, would have become the first while coming off a torn ACL that Mavericks owner Mark Cuban told ESPN's Tim MacMahon probably would keep Porzingis sidelined all season.

Instead, the Knicks decided the better option was to use Porzingis to not only clear $50 million in unwanted salary but also to bring back Dennis Smith Jr. and two future first-round picks, assets that could be used in future deals to secure talent, should their free-agent plans play out as they hope they will.

Doing so also opens up another -- albeit extremely complicated -- scenario in which the Knicks could land not only Durant and Irving this summer, but Anthony Davis as well.

First, the Knicks would need to get lucky in the lottery, winning it for the first time since getting Patrick Ewing in 1985.

Second, they would then have to secure commitments from Durant and Irving when they become free agents July 1.

Finally, once they had the two free agents in hand, they'd need Davis to either still be in New Orleans, or be with some other team that would be open to trading him. They then could use the lure of Zion Williamson, coupled with Smith, Frank Ntilikina, Mitchell Robinson and Kevin Knox and whatever other picks the Knicks would potentially have to add to the mix to land Davis in a trade.

New York would've been able to make all of those moves at once had it not stretch-waived the final year of Joakim Noah's contract already. Instead, in this scenario, the Knicks would have to wait to officially trade for Davis until the waiting period before signed draft picks can be traded is complete, so they can include that salary in the deal to make the money work (much as Cleveland did with Andrew Wiggins in 2014).

Even setting that long-shot scenario aside, the Knicks obviously would still be thrilled to land Durant and Irving as free agents in July. And, while sitting courtside Friday morning, Irving did nothing to dispel the notion that was possible.

All of this puts the Celtics in an exceedingly uncomfortable position with just a few short days before next Thursday's deadline. Boston's belief has been that, despite Irving's frustrations and the protestations of Davis' camp that he would only consider Boston as a rental, if the Celtics can land Davis in a trade in June, both he and Irving will happily be in Celtics uniforms for a long time to come, and Boston will have a chance to create a new NBA dynasty.

If not for CBA rules preventing Boston from trading for Davis now, the uncertainty probably would be a moot point, and the deal would already be done. The same holds true for the Lakers, the preferred destination of Davis and his agent: If the Lakers had the assets to get such a deal done, it would already be done. Instead, their collection of middling young talent is seen by few around the league as enough to get this deal done. Therefore it isn't, and it seems unlikely to get done anytime soon.

So now all sides will continue to attempt to project strength, and declare they hold the winning hand, for the next six days until the deadline comes and goes. And as they do, the league will continue to be driven by its players in a way it never has been before. 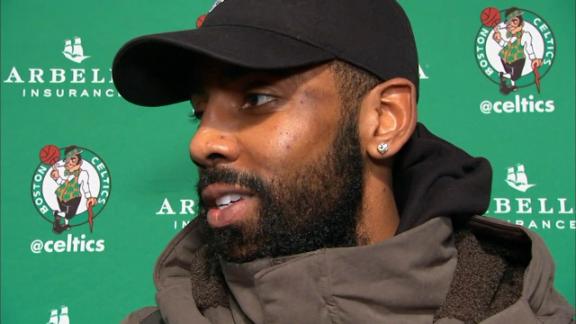 Kyrie: The media is reaching to get reactions out of him
Kyrie Irving is happy that other NBA players want to play with him, but he is irritated by the media attention. 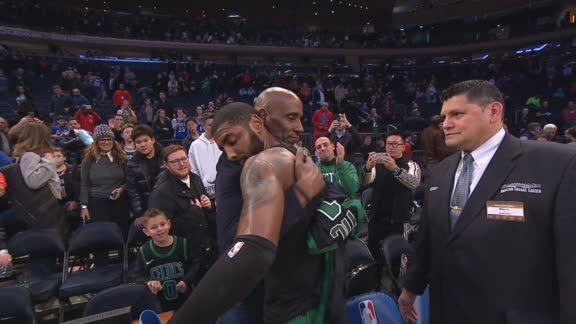