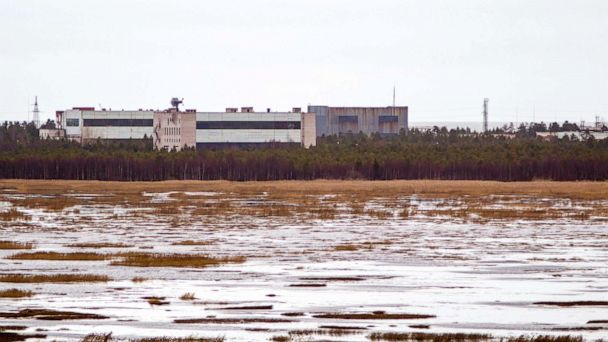 Moscow -- The radiation spike that followed the apparent explosion of a nuclear-powered missile engine in Russia -- an event that left seven dead and has been cloaked in secrecy -- was higher than previously indicated by the country's officials, Russian government weather agency on Tuesday said.

The news comes amid conflicting reports that authorities were preparing to evacuate a village close to the Arctic test site where the blast occurred and that doctors who had treated engineers injured in the blast had signed non-disclosure agreements.

Roshydromet, a state weather monitoring body, said Tuesday its sensors in a city near the Nenoksa Missile Test Site on Russia's northern Arctic coast had picked up a spike in background radiation levels four to 16 times above the norm immediately after the blast on Friday when what officials have confirmed was a nuclear-powered missile engine exploded on a floating launch pad. The spike lasted about an hour and half, before levels returned to normal, the agency said.

The spike was still low, but above what Russian authorities said on Sunday, when officials from a nuclear research center noted the spike had been double the norm.

The International Atomic Energy Agency on Tuesday issued a statement saying Russia had informed it the radiation levels around the site in the Arkhangelsk region were equivalent to natural radiation.

Campaigners and experts said although they did not want to rule out possible health risks entirely from the fallout-- which they said were likely low-- the main problem was how Russian authorities had handled information about the accident.

"It's not really dangerous for health if it's not for really long and this spike was for less than an hour," Konstantin Fomin, a media coordinator on energy issues at the environmentalist group, Greenpeace, that has gathered its own readings in the area showing the spike was 20 times above the norm, told ABC News on Tuesday. "The real problem is lack of transparency."

The data on the radiation came five days after the explosion that killed five nuclear engineers and two defense personnel and that U.S. officials and outside experts have said they believe "likely" involved a nuclear-powered cruise missile. The weapon has been touted by President Vladimir Putin as the centerpiece of Russia's new nuclear arsenal, described as having almost "unlimited range" due to what is effectively an onboard nuclear reactor.

A U.S. official on Monday told ABC News that they thought it was "likely" the explosion had been caused during a test on the missile, named the SSX-C-9 Skyfall by NATO and as the 9M370 Burevestnik by Russia.

The official said the U.S. had detected increased radiation levels close to the explosion.

The delay in making the information widely public, reflects the highly secretive response from Russian authorities, who first appeared to conceal that the blast involved radiation and then only slowly released details about it -- for some, setting off echoes of the Soviet response to the Chernobyl nuclear power plant disaster in 1986.

In the first days after the accident, Russia's defense ministry initially made no mention the engine had contained nuclear materials and then denied there had been a spike in radiation. The local city administration on the Friday released a statement saying there had been a spike to a similar level of radiation reported by the weather agency on Tuesday, but then deleted it from its website.

State television also initially largely ignored the accident, barely mentioning it in news broadcasts for the first two days. Only on Sunday, did officials from Russia's Federal Nuclear Center, which carried out the test, acknowledge in a video interview, that the engine used "radioactive materials." Russia's state atomic company Rosatom on Sunday also said in a statement the test had involved placing a small-scale isotope power source into a liquid propellant engine, but it has given almost not details.

The Kremlin on Tuesday for the first time commented on the explosion, but mostly turned aside questions. Putin's spokesman, Dmitry Peskov, on Wednesday told reporters that "all relevant agencies were working to ensure the safety of Russian citizens," saying he had nothing more to add on the explosion.

Experts said the radiation levels recorded did not appear to pose serious dangers. Roshydromet's said its sensors had picked up readings of 2 microsieverts per hour; the European norm for the total natural radiation that an adult will absorb in a year is 1000 microsieverts and the spike had lasted only around an hour according to the weather station and local people monitoring it. The most contaminated areas at Chernobyl by contrast had been thousands of times higher.

Fomin, the Greenpeace coordinator said. "It's obviously not on the Chernobyl scale but even if there is no danger -- and I hope there is no danger -- it is very worrisome that our government acts with so little transparency. Because when something more dangerous will happen, and when we speak about something nuclear it's more about when, not if, and if they will operate with such lack of transparency it can be really harmful."

Fomin said he did not understand why the local administration would have been pushed to delete its statement alerting about the elevated radiation levels since it coincided what Roshydromet's on Tuesday. He said Greenpeace had actually already seen the readings from Roshydromet shortly after the blast, they had just not been widely publicised by authorities. He said his main concern was that authorities had not made public what radioactive materials were used in the engine, in particular since the measurements so far have only been for gamma radiation, not alpha particles, which can cause cancer. Some uncertainty also still remained about the levels of radiation released during the blast, since the sensors that picked up the spike were located in Severodvinsk, a city of 200,000 people about 20 miles east of the missile test site, meaning that the levels could have been higher closer to the blast.

On Tuesday, the state news agency TASS reported that several doctors who had treated the three engineers injured in the explosion had now been voluntarily flown to Moscow for examination and that they had signed non-disclosures agreements.

In a sign of the uncertainty surrounding the accident, there were conflicting reports in state media as authorities apparently first requested and then cancelled a temporary evacuation of the Nenoksa, the village right by the test site. Ksenia Yudina. The head of the Nenoksa village council's press service told the state news agency RIA Novosti residents had been asked to prepare to leave on Wednesday morning while the military carried out an operation there.

But Arkhangelsk's regional governor, Igor Orlov, hours later rejected that as "nonsense" saying no evacuations were taking place. Yudina then told Interfax that the request to leave had now been cancelled. Reports in local media still later quoted residents suggesting that such temporary evacuations were common, often requested just before a test was carried out at the test site.

"There's a lot of contradictory information," said Rashid Alimov, director of Greenpeace Russia's energy department. "So it's clear that people are having to operate in the conditions of a lack of information."
Report a correction or typo
Related topics:
abc newsnational
Copyright © 2021 ABC News Internet Ventures.
More Videos
From CNN Newsource affiliates
TOP STORIES