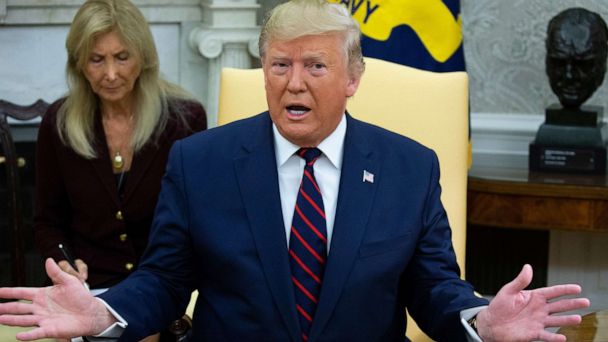 ABCNews
By MATTHEW VANN
After the parents of Harry Dunn, a British teenager killed when the wife of an American diplomat crashed into his motorcycle, turned down a meeting with Anne Sacoolas at the White House on Tuesday, President Donald Trump told reporters Wednesday that he thought they wanted to meether.

"I thought they were -- based on what I thought -- that they wanted to meet," he said in the Oval Office. "But now they only want to meet in the U.K. and that's up to them."

Trump met with Tim Dunn and Charlotte Charles, the 19-year-old's parents, on Tuesday and offered them a meeting with Sacoolas, who was waiting in another room, according to a family representative.

"We weren't ready to meet her, it would have been too rushed," Tim Dunn said, according to the Press Association. "It's not what we wanted; we wanted a meeting with her in the U.K."

Charlotte Charles, Dunn's mother, said she "initially" thought the meeting at the White House on Tuesday was being held to sweep her son's death under the rug.

Dunn, 19, was riding his motorcycle along a roadway in the village of Croughton, England, on the night of Aug. 27, when a car traveling in the opposite direction on the wrong side of the road hit him head-on, killing him. Sacoolas, 42, who is married to an American diplomat, admitted that she was responsible for the crash, but fled the U.K. to the U.S. after apparently claiming diplomatic immunity, which protects diplomats and their family members from prosecution or lawsuits under the host nation's laws.

Her attorney, Amy Jeffress, has said her client wants to meet with the family to apologize and take responsibility. Dunn's parents told ABC News that they would only meet with her if she returned to the U.K. to face the consequences of her actions.

On Wednesday, Trump suggested that British Prime Minister Boris Johnson, who made a public plea for Sacoolas to return to the U.K., asked Trump would organize the meeting between Sacoolas and the Dunn family.

"I offered to bring the person in question in and they weren't ready for it, but I did offer," Trump said. "I spoke with Boris, he asked me if I'd do that, and I did it."

Dunn's parents traveled to Washington on Tuesday, after receiving a call from the White House to say that they would be meeting with a senior official regarding their case.