NHL Power Rankings: 1-31 poll, plus the player who leveled up for every team 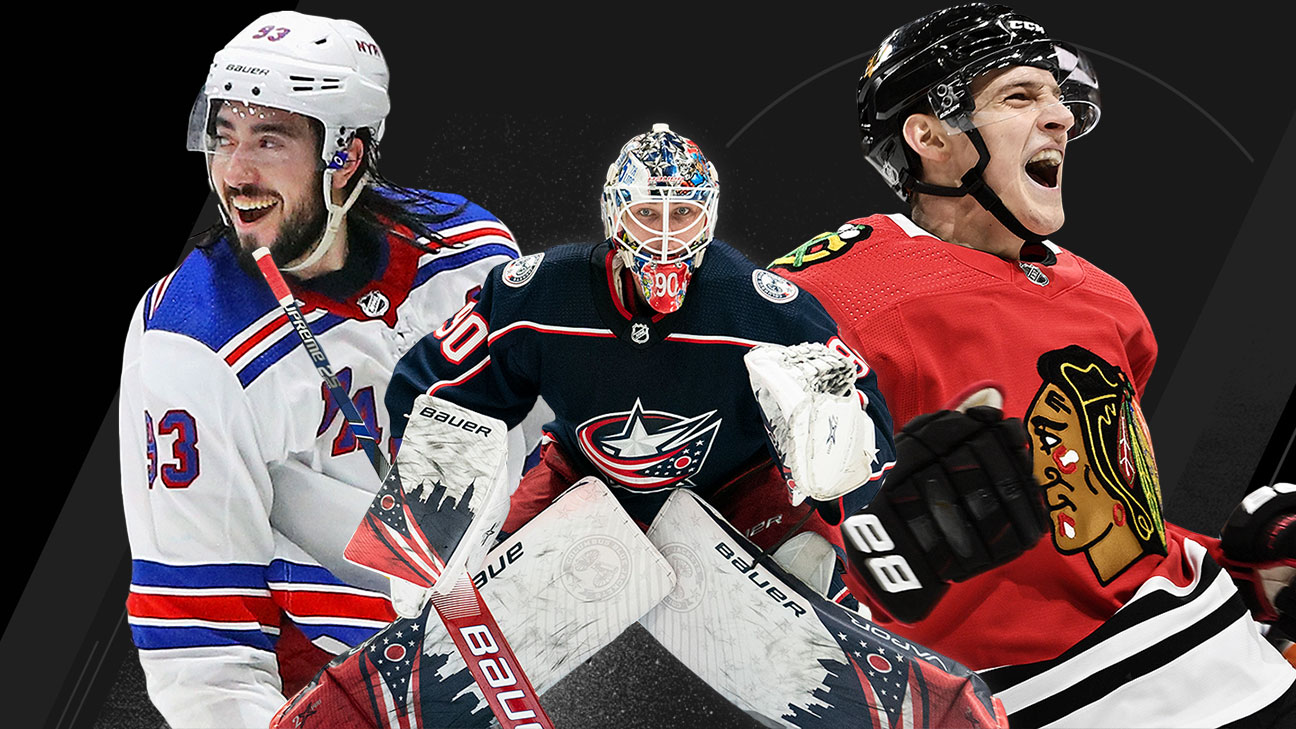 We have reached the point of the NHL season where fans have to check the standingseach morning to find out whether their team is in or out of the playoffs. But for this week's ESPN NHL Power Rankings, we took the whole campaign into consideration, and identified the player on each team who leveled up this season.

How we rank: The ESPN hockey editorial staff submits selections ranking teams 1-31, and those results are tabulated to the list featured here. Teams are rated through Tuesday night's games, taking into account overall record, recent success and other factors such as injuries.

Note: Standings point pace is based on games through March 11. Many stats are courtesy of Hockey Reference.

He's third in the league in points right now, and is going head-to-head with Alex Ovechkin for the goal-scoring title. David Pastrnak is taking his game to new superstar levels this season.

When the Lightning lost Victor Hedman to injury this week, it was 21-year-old Mikhail Sergachev whom they trusted the most to absorb the top defenseman's ice time. Sergachev is making the trade for Jonathan Drouin look one-sided.

Last one, best one. David Perron is on his third stint with the Blues, and this is his most productive one yet. The first-time All Star has already set a career high with 60 points with 12 games remaining.

Before this season, Pavel Francouz had appeared in two NHL games. The 29-year-old is now outplaying Philipp Grubauer. Francouz has won 20 of his 29 starts, with a .922 save percentage.

After a disappointing postseason (zero points in seven games against the Hurricanes),Jakub Vranahas bounced back in a big way. His ice time is up, he already has notched his career high in points and he should hit 30 goals for the first time.

Travis Konecny signed a new deal this past summer, and his $5.5 million average annual value is already looking like a steal. One of the league's best chirpers is also leading his team in goals per 60 minutes.

Since the Golden Knights debuted, they've never had a true, elite No. 1 defenseman. Shea Theodore-- who leads the team in ice time and has 46 points -- is coming close to unlocking that status this season.

He has spent some time on IR this season (what Penguin hasn't?), but Bryan Rust is still crushing his previous personal bests. The winger is a point-per-game player, much higher than his previous best of 38 points in 69 games two years ago.

Leon Draisaitl has taken his game to new heights this season. The 24-year-old, who leads the league in points, is no longer viewed as Connor McDavid's sidekick; Draisaitl is a star in his own right.

What more is there to say about Denis Gurianov at this point? The 22-year-old has been a treat to watch, and leads the Stars in goals, even while playing fewer minutes than perhaps he should.

He's 19 and already tearing it up with 61 points in 68 games this season. Andrei Svechnikov is the next Russian superstar you need to know.

Last season wasn't the smoothest for William Nylander, but the 23-year-old Swede has proved why he was worth all the contract drama. He has hit 30 goals for the first time in his career.

Goaltending was supposed to be an area of weakness for Columbus this season. Elvis Merzlikins (a virtual unknown) leveled up, especially when Joonas Korpisalo went down because of injury. The rookie has five shutouts and a .935 save percentage through 31 starts.

Mika Zibanejad's five-goal night got a ton of attention, but the NHL's most productive DJ is averaging 0.71 goals per game, nearly double the 0.37 he recorded last season.

Entering the season, we weren't sure what the Flames would get out of their goaltending tandem of Cam Talbotand David Rittich. The team has been inconsistent, but both goalies leveled up this season.

We figured a Hughes brother would be making noise during his rookie season. But instead of Jack Hughes, the No. 1 overall pick last spring, it's older brother Quinn Hughes who is a front-runner for the Calder Trophy.

With so much offseason turnover, 24-year-old Neal Pionk -- acquired in the Jacob Trouba trade -- was thrust into a top role with the Jets almost immediately. He has done great, leading Winnipeg blueliners in ice time and points.

Lately, Chris Driedger has leveled up for the Panthers. It has been a small sample (11 starts), but with a .936 save percentage, he has been a much better option than $10 million man Sergei Bobrovsky.

In Nashville, Kevin Fiala was always a vaunted prospect who had yet to pan out. A trade to Minnesota clearly revived him. He has been a big part of the Wild's resurgence, with 14 goals in his past 18 games.

Roman Josi has never truly received the credit he is due. In his first season without P.K. Subban, he has leveled up on offense. He leads the Preds in points, and has 17 more than his next-closest teammate.

Conor Garland got his NHL shot last season as the Coyotes dealt with unrelenting injury luck. Garland proved he has a chance to stick around by leading Arizona in goals this season.

Tomas Tatar's career wasn't in great shape when he was traded to the Golden Knights two years ago and faltered. With a career-high 61 points this season, Tatar found his game again as a now-untouchable piece for the Habs.

The Blackhawks traded a mere fifth-round pick to the Kings for Dominik Kubalik's rights last year. The 24-year-old worked all the way up to the Blackhawks' top line, and leads all rookies with 29 goals.

The season didn't begin as he (or the team) wanted, but 23-year-old Mackenzie Blackwood upped his game this season. He has won 14 of his past 27 starts, compiling a .927 save percentage in that span.

Victor Olofsson, a 2014 seventh-round pick, went to six development camps before he finally got his shot on the NHL roster this season. With 20 goals and 42 points, he's proving he is here to stay.

We've got to give kudos to Nicolas Deslauriers, who leveled up this week with a first-period hat trick against the Senators. Entering Tuesday, he had only four goals in 57 games.

One of the bright spots on the Kings this season is 26-year-old Alex Iafallo, who has already set career highs in goals and assists. The formerly undrafted forward is second on the team in points.

So much has gone wrong with the Sharks' season that the player who leveled up isn't on the team anymore. Few would have thought it in the preseason, but Barclay Goodrowreturned a first-round pick at the trade deadline.

Connor Brown might not have been the biggest name involved in the deal with the Maple Leafs last summer, but since coming to the Senators, the 26-year-old -- with a career-high 52 points already -- has stepped up.