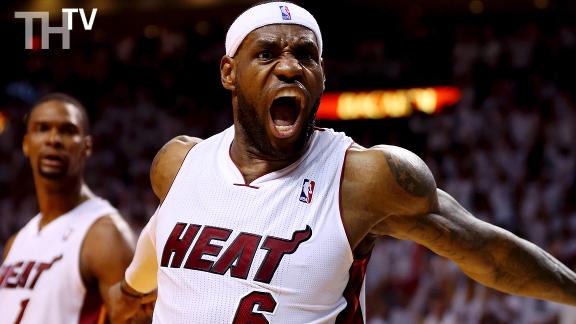 INDIANAPOLIS -- Chris Bosh has hinted for some time that he doesn't intend to go anywhere after he can become a free agent next month, and the Miami Heat center made his strongest statements on the matter in the past two days.

In an interview with Dan Le Batard's ESPN Radio show in Miami on Tuesday, Bosh said he wants to stay with the Heat.

"I don't want to go anywhere. I like it here. It's Miami," Bosh said. "Everybody wants to come here. Yeah."

He has two seasons and $42 million left on his contract with the Heat but can opt out before June 30 and become an unrestricted free agent.

Bosh made his eighth All-Star team this season and figures to have multiple suitors, including the Dallas Mavericks and Los Angeles Lakers, if he becomes a free agent. He could sign a five-year contract worth in excess of $100 million. He also could do what he did in 2010, when he accepted less than the max contract to sign with Miami, taking a six-year, $110 million deal with the opt-out this summer.

Bosh indicated he was open to that option again, saying: "If that's what it takes."

He reiterated his position after the Heat's shootaround Wednesday before Game 5 of the Eastern Conference finals against the Indiana Pacers.

"I'm serious, but that's for later conversation," Bosh said about his intentions to stay. "I'm going to concentrate on this right now and leave that for later business."

Fellow Heat stars Dwyane Wade and LeBron James also have contract opt-outs before June 30. Both have said they will not make a decision until after the season.