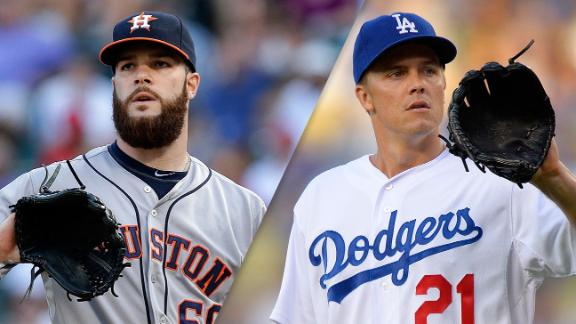 CINCINNATI --Zack Greinke of the Los Angeles Dodgers and Dallas Keuchel of the Houston Astros have been named the All-Star Game starting pitchers for the National League and American League, respectively.

Greinke is 8-2 with a major league-best 1.39 ERA for the first-place Dodgers and has not allowed an earned run in his last five starts, a span of 35 2/3 innings. He has allowed more than three runs in a start just once this season and has gone no fewer than six full innings in each of his 18 starts.

"We had some great starters who are candidates, but the numbers he's putting up are really, really unbelievable,'' NL manager Bruce Bochy said.

Greinke, the 2009 Cy Young Award winner while a member of the Kansas City Royals, joined the Dodgers prior to the 2013 season and is appearing in his third All-Star Game.

Keuchel is making his first All-Star appearance representing the surprising Astros, who are a half-game behind the AL West-leading Los Angeles Angels.

Yost said he became sold on Keuchel after the Astros lefty dominated Kansas City in a 4-0 Houston victory on June 30. "I told myself [I would consider him] if he can show me what he's got for five innings and then it up,'' Yost said. "Then he went out there and shoved it for eight innings.''

Keuchel elicited some chuckles when he looked at Archer and Gray in the front row at the news conference and deferred to them.

"If it were up to me, Mr. Yost, I probably would have picked one of these two folks here,'' Keuchel said.

Greinke and Keuchel are Nos. 1 and 2 in pitching WAR, with Greinke's 5.5 mark ranking ahead of Keuchel's 4.7, which ties him for second with Max Scherzer of the Nationals.

The All-Star Game will be played in Cincinnati on Tuesday night. Here's a look at the All-Star starting lineups.