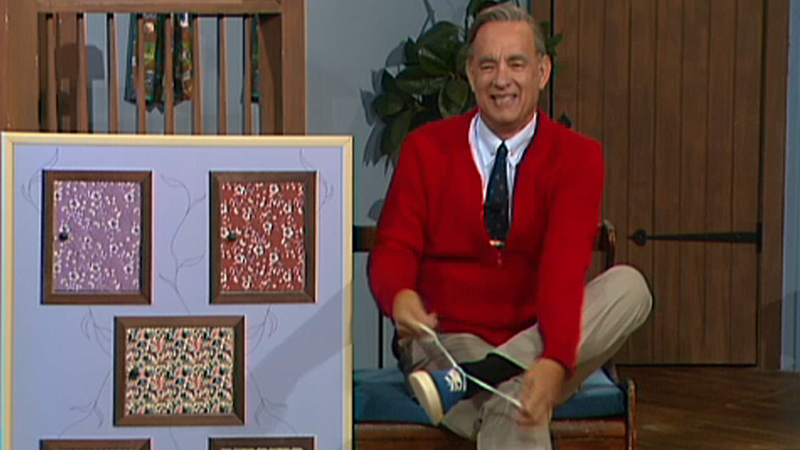 NEW YORK (WABC) -- A new film starring Tom Hanks and chronicling the life of Fred Rogers hits theaters this weekend, and "A Beautiful Day in the Neighborhood" is highly anticipated for those searching for a sense of nostalgia.

The documentary about the late Fred Rogers, "Won't You Be My Neighbor?" was one of my favorite movies of last year -- so I wondered if the new movie had anything to add to our understanding of this unlikely TV star.

Rogers had a gift for empathy the actor embodies almost perfectly, and this is a wonderful match of one star's persona with another's. And the critic who counts most, Fred's real-life wife Joanne Rogers, is most enthusiastic.

In her opinion, Hanks is, "adorable as Fred. He looks wonderful."

"A Beautiful Day in The Neighborhood" tells her husband's story by showing the relationship between Rogers and a skeptical journalist played by Matthew Rhys.

"You love people like me," the magazine writer tells Mr. Rogers, adding he is one of the "broken people."

The genial man replies, "I don't think you are broken."

The writer is based on a real person whose jaded outlook on life was changed after profiling Mr. Rogers for Esquire magazine, but the story of how the reporter becomes a better father and son never comes alive -- and the time spent away from Hanks as Rogers is really boring.

The trailer ignores the many dull scenes without him, and while this is dishonest, a handful of wonderful scenes do manage to deepen our understanding of Rogers' remarkable legacy.

One of the best moments is when kids on a New York City subway sing "Won't you be my neighbor?" and Mr. Rodgers replies, "That was wonderful!"

The Hollywood hype machine is in overdrive already encouraging Oscar voters to consider giving this movie the top trophy for Best Picture, but "A Beautiful Day in The Neighborhood" is far too flawed to get film's highest honor. Still, Hanks should get a nomination for his terrific performance.