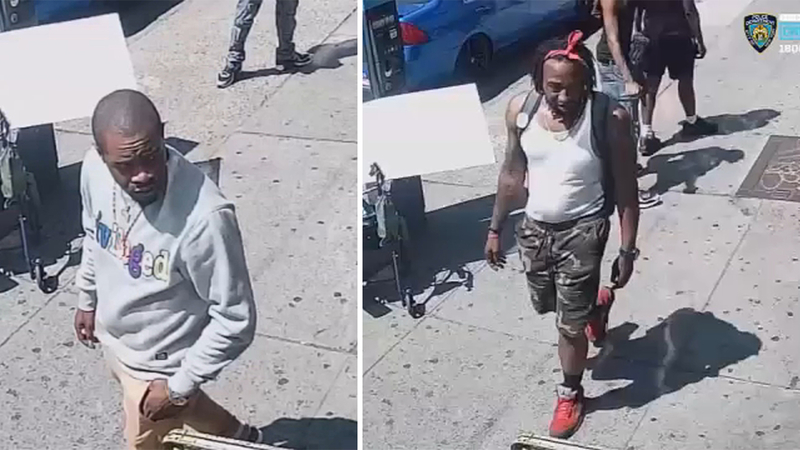 MOTT HAVEN, Bronx (WABC) -- An Eric Adams campaign volunteer is out of surgery and in stable condition after being stabbed multiple times with an ice pick Sunday, while police have released new video showing the men for whom they are searching.

"He's out of surgery," Adams told CNN Monday. "We visited him, and I spoke with him at the hospital. The video was just horrific. Someone came up behind him and repeatedly stabbed him."

Police believe the stabbing stemmed from a previous dispute the victim had with the suspect, possibly over money.

"We don't know, hopefully not," he said. "The police department is conducting a thorough investigation. The video was there, and that's why it's so important to use technology to add another layer on public protection in the city."

The Democratic front-runner for mayor is calling for something to be done as violent crime continues to plague the city.

Crime has been a major issue in the race, and now, it has hit home for the Adams campaign.

Video from the NYPD shows the two suspects wanted in the stabbing, and police say the man in the white tank top stabbed the victim repeatedly.

The accomplice is seen wearing a sweatshirt that says "privileged."

A knife and an ice pick were recovered near the scene, and authorities said it was possible the victim had brought the ice pick.

The NYPD also says the victim has 42 prior arrests of his own and refused to speak to detectives, requesting a lawyer.

The attack happened while the volunteer was canvassing on 150th Street and Morris Avenue in Mott Haven on Sunday.

Although badly injured, he ran a block from 150th Street to 149th Street to flag down officers.

"He was a volunteer that came out every day, and actually the video shows he was out giving out literature for the campaign, but he was stabbed multiple times," Adams said.

The other New York City mayoral candidates tweeted their well wishes for the victim.

My thoughts are with he and his family and my heart hurts for Team Adams today. New Yorkers shouldn't have to fear walking down the street.

Horrible news. My thoughts are with your volunteer, their family, and your entire team, Eric.

This is horrifying news. My heart goes out to this volunteer and his loved ones. Elyse and I wish a speedy recovery.

This is abhorrent. My thoughts are with this volunteer, his family, and all of Team Adams. Everyone over at Team Donovan is wishing for his speedy recovery.

Pained to hear this. Sending love to his family and thinking of the team and volunteers.

Also in the Bronx, the New York Yankees welcomed the young children who narrowly escaped gunfire last week while walking in the Bronx.

JULY 2 UPDATE: Police have arrested Gary Oliver in connection with the stabbing.