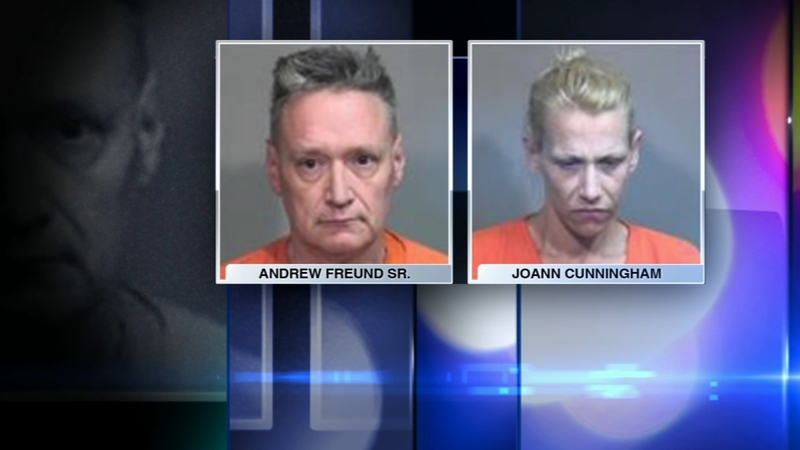 Joann Cunningham, 36, applied for a public defender and Andrew Freund Sr., 60, is still deciding on whether he plans to hire outside attorneys to represent him. The couple will likely enter a plea on first-degree murder charges in the death of their 5-year-old son, AJ, on Friday, May 10

A case worker and supervisor at DCFS were reassigned to administrative duties Friday, the same day the agency released a timeline of their interactions with AJ Freund's family.

Prosecutors said AJ was killed days before his parents reported him missing. His death was caused by blunt force trauma to the head. Police said he was forced to stand in a cold shower for a prolonged period of time and beaten by his parents.

RELATED: How did Crystal Lake police crack the case of AJ Freund?

After a week-long search for AJ, police confronted his Crystal Lake parents with cell phone evidence and the couple led them to AJ's body, wrapped in plastic and buried in a shallow grave in Woodstock.

See how bloodhounds from around the Chicago area helped in the search for AJ Freund.

The family has a long history with child welfare services and DCFS says it's reviewing its shortcomings in the case.

Here's a closer look at the Illinois Department of Child & Family Services's connection to AJ Freund starting at his birth.

Freund and Cunningham, who is seven-months pregnant, remain in jail on a bond of $5 million each.

About a dozen people from the community came to watch the court proceedings Monday morning.

"You just want to hold your kids closer every day because of people who can do things like this," said Amber Jeschke. "AJ needs justice."

"I have to support AJ," said James Ranallo. "He has to have a voice. He didn't have a fair shake in life and somebody has to be there for him, and I will follow this all the way to the end."

A hearing to decide the custody of the couple's youngest son, who was removed from the home following AJ's disappearance, was set for Monday before Freund and Cunningham were arrested and charged last week. Cunningham's attorney of only a few weeks withdrew from the custody case. She said all attorneys involved have been getting death threats. Cunningham was appointed a public defender for the custody hearing, which has been continued to May 30.

A visitation for AJ will be held Friday, May 3, from 1 p.m. to 8 p.m. at Davenport Family Funeral Home at 419 East Terra Cotta Avenue in Crystal Lake.