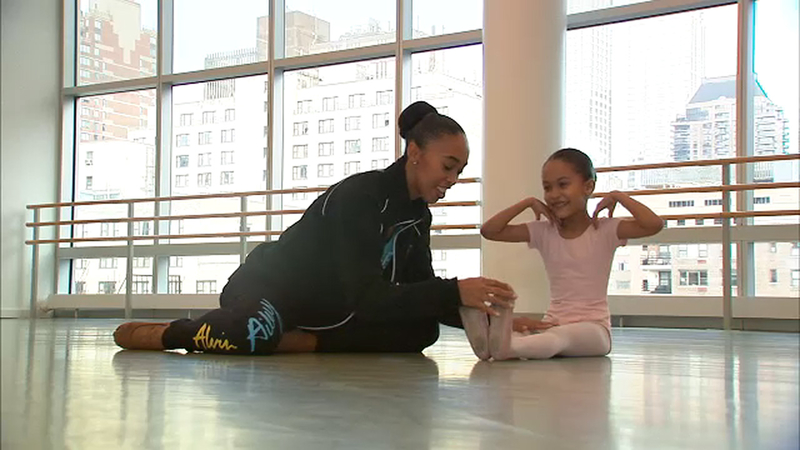 NEW YORK CITY (WABC) -- The Alvin Ailey Dance Company has been entertaining people of all ages for decades, and now, one performer is helping to pass the mantle to the younger generation.

"Even hen she was a baby, she was bopping up and down," dancer Constance Stamatiou said.

Six-year-old Savannah is literally following in the footsteps of her mother, who began performing with the highly acclaimed troupe in 2007. She had just finished her first year at college and did a summer program at Alvin Ailey.

The rest is history.

"When I came to the school and saw the way the kids moved and all the techniques that were offered, I was blown away," she said. "I immediately called my parents and said, 'I'm not going back to (SUNY) Purchase. I think this is where I belong.'"

The Alvin Ailey Dance Company has been entertaining people of all ages for decades, and now, one performer is helping to pass the mantle to the younger generation.

She left in 2011 to pursue other dreams and start a family, and Savannah was born in 2012. Two years later, a baby boy followed. But Alvin Ailey was always on her mind, so much so that Stamatiou returned. And as a result, her kids have had the uniqiue opportunity to grow up surrounded by such rich dance and music.

"Her and her brother would put ion their own little productions," Stamatiou said. "Take out blankets and do 'wade in the water.' And she has a Hello Kitty umbrella she'll hold up."

Mother and daughter now share a special bond -- the first grader is also part of the Ailey family, taking ballet and African dance..

"Anytime I can spend time seeing her in dance class or assist her, I enjoy it so much," Stamatiou said.

Six decades ago, Alvin Ailey and a small group of dancers first took the stage -- for a one-night performance. No one knew at the time, but it was the start of what's become an international movement."

"Ailey always said that dance came from the people and should always be given back," Stamatiou said. "It's great we are keeping his vision alive."