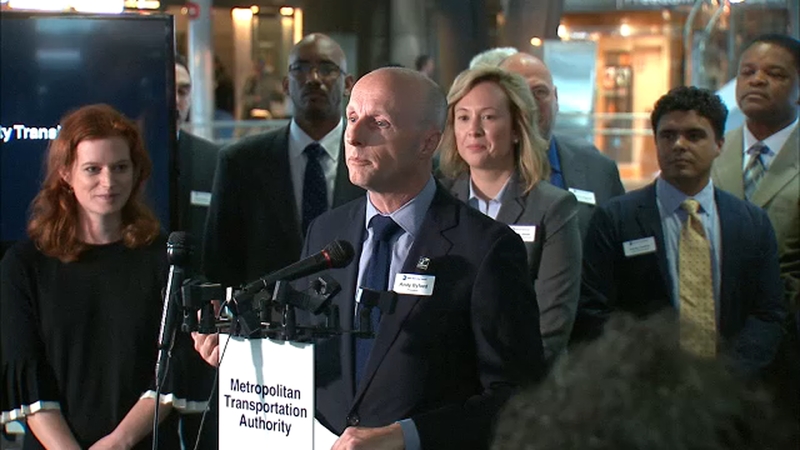 NEW YORK (WABC) -- NYC Transit President Andy Byford appeared in public for the first time since his resignation letter was rescinded Monday, praising the work of the agency amid an increase in ridership.

At an MTA subcommittee meeting, Byford says the 50,000 men and women who work for the city transit agency and his executives are responsible for the day-to-day performance successes.

Byford submitted his resignation letter last week but then changed his mind.

"I'm not going anywhere," Byford said in a statement after rescinding his resignation. "The governor and I are on exactly the same page about the need to dramatically improve the transit system in New York, and we now have the plan and the funding to do that."

The MTA touted its latest ridership numbers Monday as system-wide service updates attract more commuters on buses and trains. There has been a 4.5% increase in subway ridership.

Byford said his team will continue to turn the subway system around, if they are provided adequate resources.

"I hope these results give you, the committee and the board assurance that this team knows what it's doing," he said. "And given leeway and the means to do it, we will turn this system around."

The subway system is carrying nearly 250,000 more trips each weekday than it was a year earlier, while buses are carrying 34,000 more trips per average weekday. The MTA's commuter railroads together have carried nearly 2 million more people in 2019 through Sept. 30 than during the same period a year prior.

"These numbers are the result of a tremendous amount of hard work and dedication," MTA Chairman Patrick Foye said. "The MTA's top priority is increasing the reliability of the system and our workforce has been focused on identifying and fixing track defects, fixing signals and switches, and overhauling train cars and buses at a faster rate than at any time in memory. We're also rethinking how we communicate with our customers - and as a result of all of these improvements it's clear New Yorkers are taking notice."