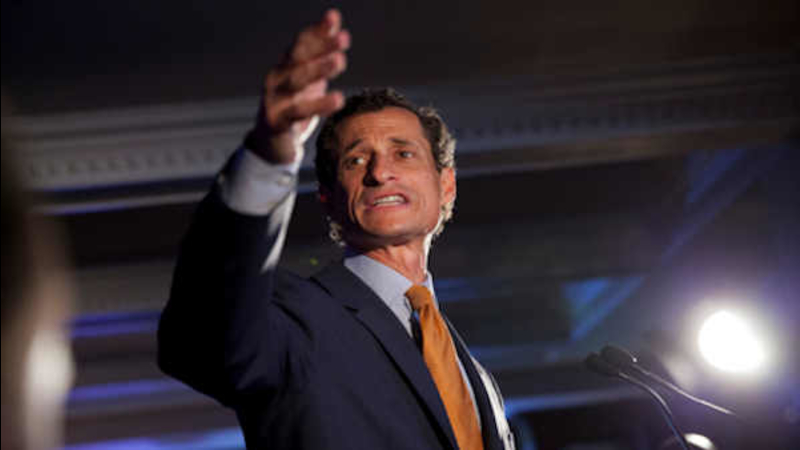 Anthony Weiner to be sentenced

As part of his plea deal, Weiner has agreed not to appeal the prosecutor's recommendation of 21 to 27 months behind bars.

"The defendant did far more than exchange typed words on a lifeless cellphone screen with a faceless stranger," prosecutors wrote to the judge. "Transmitting obscenity to a minor to induce her to engage in sexually explicit conduct by video chat and photo - is far from mere 'sexting.'"

But Weiner's attorneys contend he is a changed man who has finally learned his lesson, calling his compulsive sexting a "deep sickness" best treated without time behind bars.

The memo also suggested Weiner himself was a victim of the scandal, saying the North Carolina high school student initiated contact with him because she "hoped somehow to influence the U.S. presidential election" and write a tell-all book.

The sentencing will be the latest chapter in the spectacular downfall of Weiner, a once-promising politician and half of an up-and-coming Washington power couple.

The trouble began in 2011, when an explicit photo of Weiner, then a congressman representing part of New York City, sent from his Twitter account became public. He first claimed his account had been hacked but later resigned after admitting he'd had explicit online contact with at least a half-dozen women.

Weiner tried to resurrect his career by running for mayor in 2013 and surged to the lead in the polls. But once again, more racy online messages, where he used the cheesy moniker "Carlos Danger," surfaced to doom his candidacy and open the door for the then-little-known Democrat who would go on to win, Bill de Blasio.

His stunning downfall in that campaign was captured in the behind-the-scenes documentary "Weiner," which featured a memorable scene of Weiner and his wife Huma Abedin alone in a conference room staring at each other in what a New York Times review called "the longest and most painful onscreen marital silence this side of an Ingmar Bergman film."

In the end, the most significant impact of Weiner's woes may have been on the 2016 presidential contest.

More than any other factor, Clinton has blamed her loss on FBI Director James Comey's decision to reopen an investigation into her private email server in the campaign's final days. Comey's decision came after FBI agents investigating Weiner's sexual misdeeds discovered that her emails had been forwarded to Weiner's laptop, apparently by his wife.

In a matter of days, the FBI concluded there was nothing new in the emails, but Clinton has said the damage was done. Some political analysts suggested the issue may have indeed been a factor in tilting the election in Donald Trump's favor, particularly across Midwestern battlegrounds such as Michigan, Pennsylvania and Wisconsin.