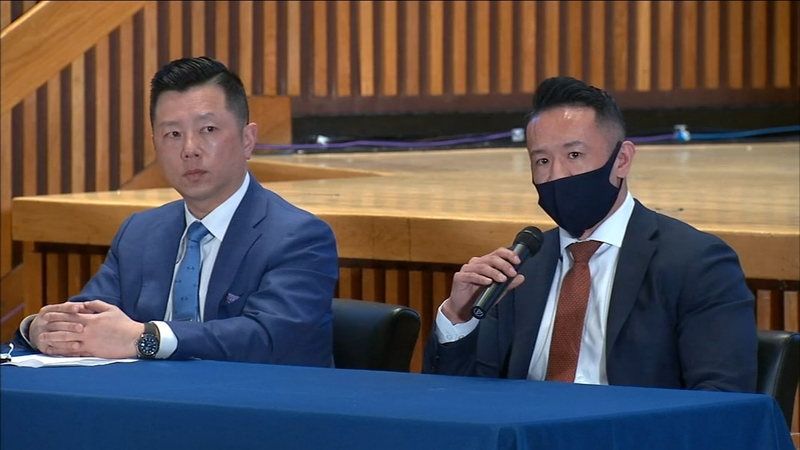 Shea said enforcement would include plainclothes officers being deployed in teams "to prevent New Yorkers from becoming victims in the first place."

"I'll say this so the message is very clear to everyone: the next person you target whether it's through speech, menacing activity, or anything else, walking along a sidewalk or a train platform, may be a plainclothes New York City police officer so think twice," Shea said.

The NYPD is also adding two detectives to its hate crimes task force.

The undercover officers are being trained and will be on patrol by the end of the weekend, Chief of Department Rodney Harrison said.

He described the complement as a "robust team" but declined to give a specific number of officers, all of whom are of Asian descent.

Harrison said the NYPD had already begun increased outreach efforts including holding community forums in Flushing and Chinatown and had another planned for Thursday evening in Sunset Park.

"People want to know, 'what do I do? What are the rules? Who do I contact? How do I come forth? How can we have more diversity in the NYPD?,'" Harrison said.

Harrison said police are using the feedback they are receiving in these forums to develop solutions for combating hate crimes.

Additionally, officers are being deployed to distribute posters and leaflets to people and businesses in communities with larger Asian American populations encouraging them to work with the police.

Also, anyone who calls 911 for help will now only need to say one word, the English word that identifies the language that they speak and they'll be connected to an operator that speaks their language.

The NYPD is actively investigating or has solved 12 anti-Asian bias assaults in 2021.

At this time last year, no such crimes had been reported.

This comes as community members across New York City are stepping up to help protect Asian Americans against attacks.

Dozens of people have already volunteered for weekend patrols.

Already 60 plus people have volunteered. Patrols are held on weekends.

"Basically we are the eyes and ears of the community, document and take some notes," said Teresa Ting, Main Street Patrol.

Congresswoman Nicole Malliotakis renewed her call for more police and more money for the police, which was echoed by members of this community.

"We need money, we need funding for the NYPD, for more services for our community," said Lisa Chin, Health Essential Organization.

The issue is being tackled from the grassroots, to uniformed police, with the goal to show strength in numbers and quell the anti-Asian sentiment that is grown bolder this past year.