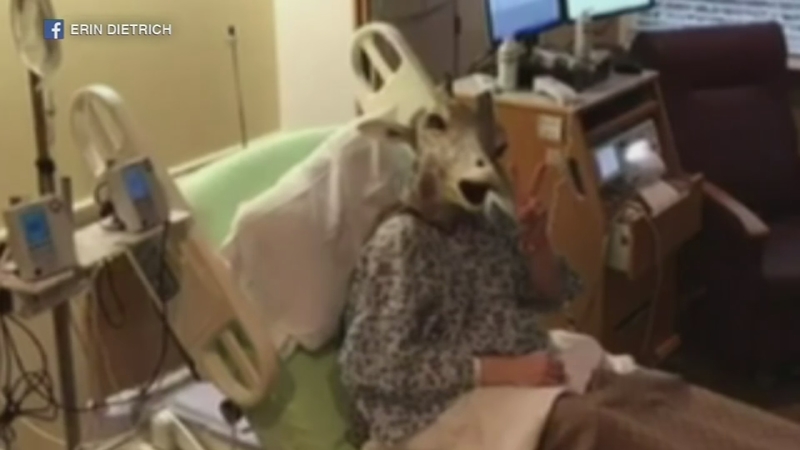 MYRTLE BEACH, South Carolina -- The mom-to-be who took to Facebook Live with a hilarious April the Giraffe impression is back - and this time, she's in the delivery room!

It appears Erin Dietrich, of Myrtle Beach, S.C., may beat April when it comes to giving birth. Dietrich posted another video of herself donning a giraffe mask on Wednesday - still pregnant and grooving - in a hospital bed.

Earlier this week, Dietrich told ABC 7 Chicago she has been "obsessed" with watching April the Giraffe, so her husband suggested ordering a giraffe mask on Amazon so they could recreate the scene in the delivery room.

But when the mask arrived Sunday night, they decided to try it out right away for their friends on Facebook Live. In the video, Dietrich can be seen doing her best April impression by pacing around her bedroom, peering into the camera, and stretching and dancing.

WATCH LIVE GIRAFFE CAM: April the Giraffe to give birth to calf

As their friends began sharing the hilarious scene, and it quickly went viral. It's been viewed tens of millions of times in the last few days.

"We were not expecting this at all!" Dietrich said. "Now we might have to do this every night!"

Earlier this week, Dietrich said her fourth child will be named Porter Lane. He's officially due on March 14.

You can watch Dietrich's latest Facebook Live update below.