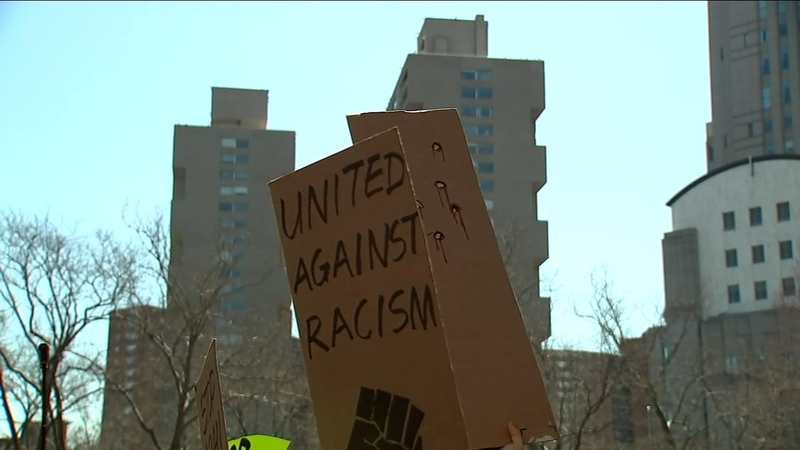 Rallies held in support of Asian Americans as another attack occurs

CHINATOWN, Manhattan (WABC) -- A 66-year-old Asian man was punched in the face Saturday in Manhattan.

It happened just before 9 a.m. on Allen Street in Chinatown.


The victim suffered swelling and bruising to the left side of his face and refused medical attention at the scene.

Authorities are on the lookout for a single suspect, about 5'7, 30 to 40 years old, wearing a brown jacket grey hoodie and black pants.

The suspect is believed to be homeless, seen carrying a white blanket.

Another round of rallies took place Sunday across the city amid the uptick in crimes against the Asian community.

In Chinatown, hundreds gathered, both supporters and victims rallying for change and standing up against hate.

That is -- after a rash of vicious attacks on the Asian American community here in New York City and around the country.

The message today: they are American and have the right, just like anyone else living here, to be respected and live here peacefully.

They packed Columbus Park. Victims of Asian American hate crimes and supporters from all walks of life, stood together remembering all the recent lives lost to hate crimes.

They want respect and more inclusion, but most of all, they want peace.

The rash in crimes against the Asian American community has also caused fear in many families as we all search for solutions to get rid of the hate.

Many rallied in Foley Square Saturday morning, demanding change and for these attacks to be addressed as hate crimes.

On Friday, a man was attacked inside a 1 train in Lower Manhattan on Friday afternoon.

According to police, the incident was unproved with no words were exchanged.

A witness, who was sitting across from the man assaulted, says a demeaning and offensive Asian slur was used during attack.

At this time, it is not being investigated as a hate crime.

Also Friday, a Good Samaritan was attacked while trying to stop a group of teenagers from harassing an Asian American owner of a laundromat in Brooklyn.

Michael Chang, the owner of Waverly Wu Laundry in Clinton Hill says the teens have been harassing him for months. He says he is very concerned, not only because of the rise in Asian American hate crimes, but this time the teens became violent.

Later Sunday, there will be another rally in Chinatown to show support for the Asian community.

The event starts at 1 p.m. in Columbus Park.