Undocumented man sworn in as an attorney in New York state 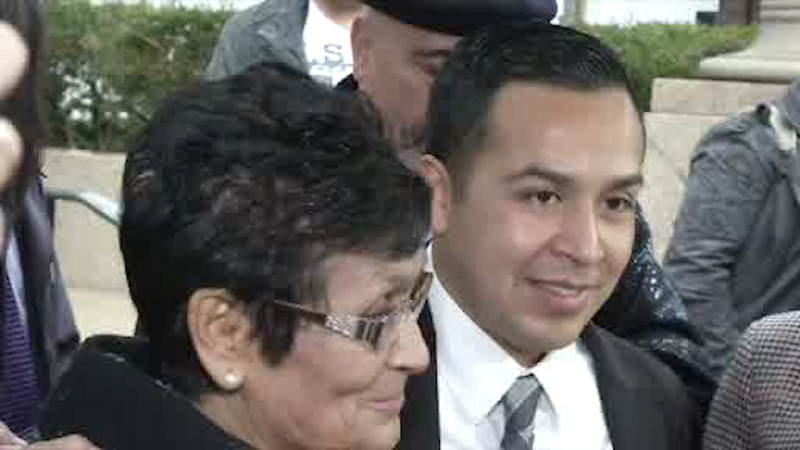 Undocumented man sworn in as attorney

DOWNTOWN BROOKLYN (WABC) -- It is an enormous victory tonight for immigrant rights, and for a 32-year-old man who has been in this country since he was 5 undocumented.

Cesar Vargas was sworn in as an attorney thanks to a panel of New York judges who ruled his undocumented status has no bearing on his character and fitness to practice law.

With his mother by his side, Vargas emerged from a Brooklyn courthouse with a four-year legal journey now behind him.

The undocumented immigrant activist was sworn in Wednesday as a lawyer.

"It was an amazing moment. It felt like the day was never going to come. But it's here, through the support of so many people, my family, my mother," Vargas said.

"Now that he is finally an attorney, I am so proud of him," said Teresa Galindo, Vargas' mother.

Vargas and his family arrived from Mexico 28 years ago and settled on Staten Island.

He graduated from St. Francis College and the CUNY School of Law and passed the bar exam in 2011. But his bar admission was denied because of his immigration status.

Last year, a panel of five judges ruled he could be admitted to practice law.

"This is a victory as well for the judiciary branch of this state. They have said, we are the exclusive determining factor as to who gets to practice law," said Juan Cartagena, of LatinoJustice.

"I'm going to dedicate my career to my family, my community and to this great nation that has opened the door to really realize the American dream," Vargas said.

What lies ahead, says Vargas, is helping others experience that very same dream.