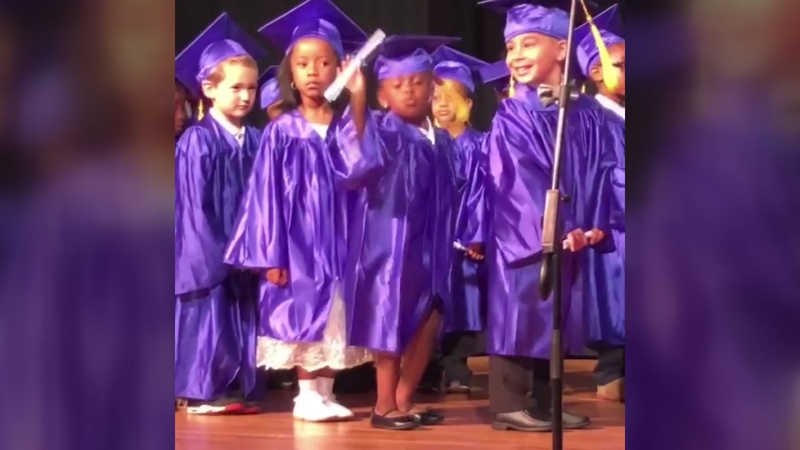 DURHAM, North Carolina -- It's the pre-K graduation moment lighting up the internet.

Five-year-old Aubrey Toby, a student at Christian Prep Academy in Durham, made sure to add a little pizzazz to the ceremony, dancing across the stage before culminating with a spin - much to the delight of the crowd.

The 26-second video was shot by Toby's godfather, who posted it on Instagram.
EMBED More News Videos

Aubrey Toby, a student at Christian Prep Academy in Durham, shows off her moves.

For Charlyne Thomas, Aubrey's Pre-K teacher, the dance meant much more than just a lighthearted moment.

"She's just developed," Thomas said. "Developed being in the classroom, intermingling with her friends, and just learning and developed. She's just sprouted, like a butterfly."

Thomas shared a drawing that Aubrey had made for her earlier that day, noting the girl's overall artistic abilities. It is Aubrey's first time in an organized classroom, with her dance representing a major leap to the center of attention.

He's still surprised by the strong reaction the video has garnered.

"Utter disbelief," he said. "I wasn't prepared for it at all. Like I said, I know my child. She loves the attention. She loves just playing and things like that. But when she started walking off and the spin happened, I was't expecting that at all. I wasn't ready for that. Um, yeah, it was crazy," .

Thomas added she was also surprised by the 5-year old's dance, noting they had gone over the graduation procedure.

Toby danced to "Can't Stop The Feeling'' by Justin Timberlake during the graduation ceremony, which took place at the Hayti Heritage Center in Durham.

Wednesday, Toby said she was excited to move on to kindergarten and expressed hopes of becoming a doctor someday.