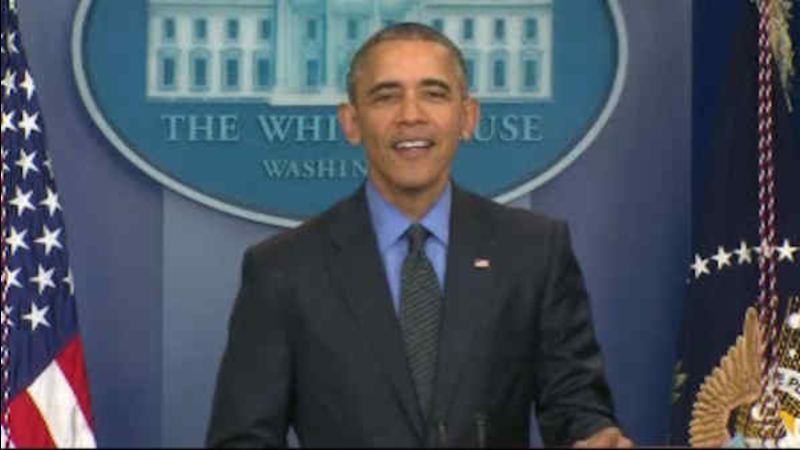 WASHINGTON -- Closing out a tumultuous year, President Barack Obama sought to lay the groundwork Friday for his last year in office by vowing not to fade in the background but instead use his remaining months to push longstanding goals to fruition.

In his annual year-end news conference, Obama portrayed 2015 as one of significant progress for his agenda, pointing to diplomacy with Iran and Cuba and an Asia-Pacific trade agreement as big wins for his administration. He also praised a Supreme Court ruling legalizing gay marriage and a congressional rewrite of the No Child Left Behind law as further victories for causes he's made central to his presidency.

"I said at the beginning of this year that interesting stuff happens in the fourth quarter - and we are only halfway through," Obama said.

Calling attention to his signature legislative achievement, Obama announced that 6 million people had signed up for health care so far this year under the Affordable Care Act, a surge that officials say illustrates the program's durability.

After the news conference, Obama was to depart for San Bernardino, California, where he planned to meet with families of the 14 victims of the recent mass shooting. He then will fly to Hawaii where he'll spend two weeks on vacation with his wife and daughters in what has become a family Christmas tradition.

Hours before his departure, Congress passed a major bipartisan budget package that staved off a potential government shutdown and extended tax cuts for both families and businesses. The White House has indicated Obama will sign it.

Obama said lawmakers had ended the year on a "high note" with additional legislation on transportation and education. He noted optimistically that by averting a funding crisis for the next nine months, Congress had cleared a path for cooperation with him next year on areas of common ground, such as criminal justice reform.

"Congress and I have a long runway to get some things done for the American people," he said.

Obama took questions as he closed out a turbulent year marked by successes on restoring diplomatic relations with Cuba, clinching a nuclear deal with Iran and finalizing an unprecedented global climate treaty. Those successes have been tempered by a lack of progress on the president's other priorities, like closing the Guantanamo Bay detention center.

Obama said he'd present a long-delayed plan to close the prison to Congress early next year, then wait for lawmakers' reaction before determining whether to take action on his own to shut it. He predicted the prison population would dwindle by early next year to less than 100, a threshold his administration has been pushing for to bolster its argument that keeping the facility open isn't cost effective.

Amid widespread fears about terrorism and extremist, Obama pushed back against critics questioning his strategy for defeating the Islamic State group in Iraq and Syria, arguing that "there's only so much bombing you can do." He also affirmed his longstanding position that Syrian President Bashar Assad must leave power for Syria to resolve its civil war, a stance that has been questioned in recent days amid comments from Secretary of State John Kerry and others.

"Five years later, I was right," Obama said about Syria.

The end of 2015 marks a major transition point for the president, who has one year left to try to finish as many of his projects as possible. He won't be rolling out sweeping new policy proposals that would be unlikely to get serious consideration amid the focus on electing his successor. The White House is promising Obama will deliver a "non-traditional" State of the Union address in January laying out an agenda that includes securing congressional approval of the Trans-Pacific Partnership trade pact, taking further steps on climate change and bolstering gun control measures.

Obama plans to return to the White House in early January to begin a final year in office that will be increasingly overshadowed by the 2016 presidential campaign. Predicting success for his party, Obama said he was confident Democrats would nominate a strong candidate to replace him.

"I think I will have a Democratic successor," Obama said. "And I will campaign very hard to make that happen."