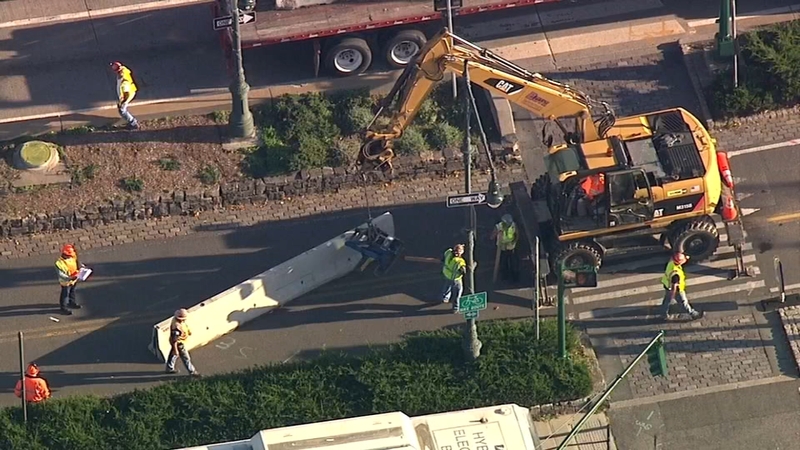 LOWER MANHATTAN, New York (WABC) -- New York City is installing dozens of concrete barriers along the West Side jogging/bike path where a driver mowed down pedestrians earlier this week in what officials called a deliberate act of terror.

The NYC Department of Transportation said it's putting the blockers in 57 different spots along the path, which runs along the western side of Manhattan near the Hudson River. They'll start at 59th Street and go all of the way down to the end of the path near the World Trade Center in Lower Manhattan.

The placement of the barriers began Thursday -- two days after the truck attack.

They're being positioned diagonally in a way so that bikes can get through but vehicles cannot.

The problem for some bike riders, is they say it makes it hard for the bikes to get through, at least more than one at a time. Social media overflowed with complaints.

"These are bottlenecks, these are going to be nightmares with rollerbladers and pedestrians and the guys in the little Campagnolo suits going 80 miles an hour," said John Lee, a commuter.

"There's no way two bikes can pass each other there and the runners as well," said James Petty, a Hell's Kitchen resident. "There's going to be accidents."

Long stretches of the path are shielded from traffic by berms planted with trees and shrubs, but vehicles have gotten onto it before. A cyclist was killed at nearly the same spot where some of the victims were struck in 2006 when a drunk driver entered the path by mistake.

There was otherwise nothing preventing a vehicle from driving on the bike path. Concrete barriers were also placed along the sidewalk on Seventh Avenue in Times Square after a man drove a car down the sidewalk earlier this year, also with the intent of hitting people.

For years, the city and private property owners concerned about truck bombs and other attacks have been gradually installing thousands of metal posts to block vehicles from getting onto sidewalks and public plazas.